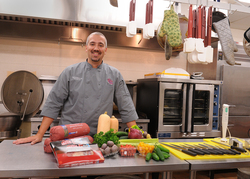 He was selected along with five other post-secondary education culinary instructors from across the nation to attend the event held in Monroe and Madison, Wis. Participants learned about every aspect of the cheese-making process, including acidification, curdling, cutting, separation of curds and whey, forming, brining, rind development, and aging.

"We had extensive hands-on experience throughout the process, as well as several hours of cheese tasting and product pairings with wine, beer, fruit and even chocolate," Barrios said. "We also participated in a culinary challenge to help Emmi Roth come up with new ways of using and marketing flavored raclette cheese."

Barrios' group created a nouvelle Mediterranean paella (rice dish) using the Mediterranean raclette, which was well received by a visiting tour group. Participants also volunteered time to help prepare and present cheese varieties at the Festival of Cheese Tasting at the American Cheese Society's annual conference and competition. In all, there were 1,794 different artisan cheeses presented at the festival.

"It was six days of intense cheese exposure," Barrios said of the trip. "I love cheese, but even I had to detox myself for a few weeks after getting back from Wisconsin."

Barrios, a New Orleans native, is a former country club executive chef and worked in restaurant management for six years. He holds bachelor's and master's degrees from Northwestern State University, where he also taught culinary arts before joining the SFA faculty in 2011. Barrios oversees the popular student-run Culinary Café, which offers lunch to the campus and community twice a week during the fall and spring semesters.

As part of the Wisconsin cheese immersion, Barrios and the other chefs were allowed to bring back to their campuses a variety of cheese samples to use in their kitchens. Some of the unique and flavorful varieties already have found their way onto Culinary Café menus this fall.

"This experience really opened my eyes to the diversity in variety, quality and taste of cheese, most of which people in our area have never really been exposed to," he said. "I am very thankful for the samples they sent back with me because we are really enjoying having them in the kitchen." 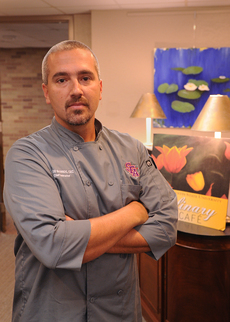