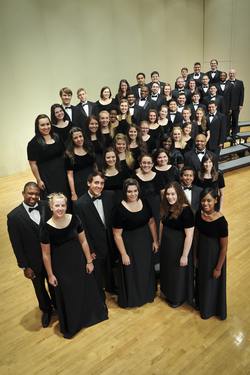 The SFA A Cappella Choir, under the direction of Tim King, will perform the complete G.F. Handel's "Messiah" at 7:30 p.m. Saturday, March 23, in Kennedy Auditorium as part of the College of Fine Arts' University Series.

NACOGDOCHES - A first for Nacogdoches will take place when the Stephen F. Austin State University College of Fine Arts and School of Music present a full performance of G.F. Handel's great oratorio, "Messiah," at 7:30 p.m. Saturday, March 23, in Kennedy Auditorium on the SFA campus.

The SFA A Cappella Choir, under the direction of Tim King, director of choral activities at SFA, and Baroque chamber orchestra will perform "one of the most well-known masterworks in all of music's history," according to King. The performance is part of the 2012-2013 University Series, "Expressions."

"Nacogdoches' concert-goers know the first act of 'Messiah' from our Christmas concerts," he said. "In fact, many have sung as part of our community chorus. But to my knowledge, the 'Messiah' in its entirety has never been performed in Nacogdoches. Performing the complete 'Messiah' is a grand event and certainly worthy of our University Series."

The greatest challenge in performing the complete 'Messiah' will be to put all of the details for such a large masterwork together, King said.

"I won't say how old I am, but I have never sung or conducted the complete 'Messiah,'" he said. "I have conducted many masterworks during my tenure at SFA, but to be able to conduct the 'Messiah' in its entirety fills a huge void in my musical experience. And what a great opportunity for our students - a once-in-a-lifetime experience."

The decision to perform "Messiah" in Kennedy Auditorium as opposed to W.M. Turner Auditorium, where other University Series events take place, had to do, in part, with the timing of the upcoming SFA opera performance and theatre productions in Turner, King said. But he also wanted a "more intimate setting" for the performance.

"When I first came to SFA in 1983, I performed my choir concerts in Kennedy," he said. "It is a fantastic place to sing - good acoustics with a more intimate setting. Now, with the fairly recent renovation, it is most comfortable for the listener, as well."

The three-act oratorio is told in the prophecy and birth; the suffering, the passion; and the promise of eternal life, King explained.

"There are no 'characters' or action scenes," he said, "yet, the story lives in the listener through Handel's wonderful and familiar music … a genius!

"I hope the audience experiences the grandeur of this Baroque masterpiece," King said, "and that the music and story have meaning for those who attend."

Corporate sponsor for the performance of "Messiah" is Nacogdoches Memorial Hospital.