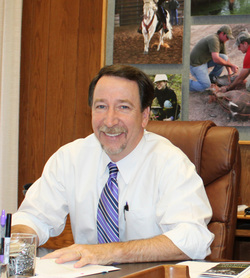 NACOGDOCHES, Texas - Dr. Steven Bullard, dean of the Arthur Temple College of Forestry and Agriculture at Stephen F. Austin State University, will be awarded the W. D. Hagenstein Communicator of the Year Award at the Society of American Foresters national convention in Charleston, S. C., in October.

This award is presented to SAF members who lead communication initiatives that enhance public understanding of forestry. This is the first time the award has been given to a dean. Bullard was selected because of his work in the national campaign to celebrate and recognize the 50th anniversary of the McIntire-Stennis Cooperative Forestry Research Program.

Bullard authored the article "A 'Driving Force' in Developing the Nation's Forests: The McIntire-Stennis Cooperative Forestry Research Program," which was published in the April/May 2011 Journal of Forestry.

When the article was published, the U.S. Department of Agriculture asked Bullard to make a video celebrating the 50th anniversary of the McIntire-Stennis program. The video was made possible by the USDA and National Association of University Forest Resources Programs, an organization that deals with university-level forestry issues through federal government agencies, elected officials, non-governmental organizations, forest industry groups, educated and scientific organizations, and the general public. Bullard was research chair of NAUFRP when the article was written and is currently serving as president.

SFA's Arthur Temple College of Forestry and Agriculture, College of Fine Arts, and College of Liberal and Applied Arts collaborated to create the video titled "The Driving Force of Sustainable Forestry," which has been widely shown across the nation.

Dr. John Hendricks, chair of the SFA Department of Mass Communication; Dr. Casey Hart, assistant professor of mass communication; William Arscott, professor of art; and Dr. Stephen Lias, assistant director of the school of music and professor of composition, served as project consultants. Dr. Linda Thorsen Bond, associate professor of mass communication, wrote the script for the video. Brad Maule, instructor of art and lecturer of theatre, narrated and appeared in the video. Michael Tubbs, adjunct faculty member, created the motion graphics. Travis Killen, systems programmer, served as team leader to pull it all together. Graduate student Dudley May filmed and edited the video. SFA graduate Lance Treviño composed all of the music for the video.

Bullard said he is grateful all of these individuals came together to contribute their skills to the project. "Their work was critical to completing this video," Bullard said.

Bullard also drafted a resolution that was passed by the U.S. Senate to celebrate the 50th anniversary of this national program of forestry research, originally signed into law by President John F. Kennedy in 1962.

For more information and to view "The Driving Force of Sustainable Forestry," visit www.naufrp.org.