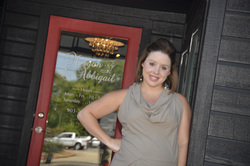 Fashion merchandising alumna Morgan Tomberlain Strong opened her own boutique in Longview about a year after she graduated from SFA.

To say that 2009 SFA graduate Morgan Tomberlain Strong is a busy lady would be an understatement. The fashion merchandising graduate stays on the go.

She serves as the buyer, sales associate, marketing specialist and garment presser for her women's clothing boutique, Morgan Abbigail, which opened in Longview in April 2010.

Staying active is nothing new to Strong. While at SFA, she served as the Student Regent on the SFA Board of Regents for one year and as Student Foundation president for two years.

At the young age of 26, Strong is proof that hard work and dedication pay off. Her boutique, which caters to women age 40 and older, has created a niche that costumers are embracing. "I have established an environment that makes shopping an enjoyable experience versus a task," Strong said.

"When I first opened, I had more of an even mixture of young and mature clothes, but I quickly found that there was a much higher demand for clothing for mature women. So, I made some changes and have developed an atmosphere that caters to women who want to look and feel great, but not look like they have on their daughters' clothes - nor do they want people to think they have on their mothers' clothes," Strong added.

Her business also concentrates on the utmost in customer service. "It's the little things like offering customers water or coffee while they shop, providing free gift wrap service, letting them take items on approval - I've even delivered clothing to a customer's house and helped her pick out just the right shade of lipstick to go with the outfit," Strong said.

Her decision to attend SFA came after a campus tour. "Both of my parents are SFA graduates, and I grew up attending Lumberjack football and basketball games. I wanted to go somewhere different. To be honest, I just went on the campus tour to appease my parents," Strong said.

"Halfway through the tour, I realized there was no other university for me. I fell in love with SFA, Nacogdoches and all of the smiling faces I saw on campus."

While enrolled in SFA's fashion merchandising program, Strong said she received invaluable experience that would serve her well in her future career as a fashion entrepreneur.

"The faculty members taught me so much. There were so many hands-on learning opportunities," Strong said. "While at SFA, I was able to work a few of the fashion markets at the World Trade Center in Dallas. I also moved to New York for three months during my senior year and completed an internship under fashion designer Kay Unger. These opportunities came about because of connections I made through the SFA Alumni Association while serving as Student Foundation president. That's one of the great things about SFA - people really help fellow Lumberjacks."

Strong said the best part of her job is making people feel good. "True story - a customer came into the boutique using a walker. I helped her around the store and even stayed in the dressing room with her and helped her try on blouses. She purchased a few and was so excited about her new clothing and how good it looked on her that she left her walker at the checkout counter and walked out to her car with her new things. I had to run after her carrying her walker. She was feeling so good about herself, and that just thrilled me."

When she's not busy at her boutique, Strong enjoys spending time with her husband, Ronnie Strong, who also is an SFA alumnus. They are expecting their first child, a girl, in September. Along with her parents and husband, her brother-in-law and brother also are SFA alumni. "We are just one big happy family that bleeds purple," Strong said.