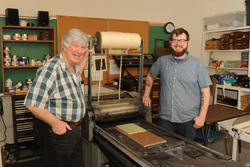 SFA senior art major Caleb Rose, right, is the first recipient of the Charles D. Jones Art Scholarship recently established by the SFA Friends of the Visual Arts. Jones, who taught for 41 years at SFA, is now director and master printer for SFA School of Art's LaNana Creek Press.

The Charles D. Jones Art Scholarship will be awarded annually to a junior, senior or graduate level student with drawing or printmaking as his or her major study area. This year's recipient is Lufkin senior printmaker Caleb Rose.

Jones is professor emeritus in the SFA School of Art where he taught printmaking, drawing, Mexican art history and the "Art of The Book" from 1971 to 2011. During that time, he was named a Regents Professor and received a Distinguished Professor Award from the Alumni Association and a Teaching Excellence Award from the university. He is now the director and master printer for the LaNana Creek Press in the College of Fine Arts and is continuing to work in the other printmaking media.

"I think this may possibly be the greatest honor I have achieved at SFA," Jones said of the scholarship. "Having achieved honors and been recognized for teaching over the years was very satisfying. But I think this is the most rewarding honor. It's just the most wonderful thing to happen to me after 40-plus years of teaching."

LaNana Creek Press, founded in 1997, has a goal of publishing a major title in the fine press tradition each year. "Thirteen Ways of Looking at a Black Bird," by Wallace Stevens, "The Knight's Tale," by Geoffery Chaucer, and "Hölderlins Conscience" by Uwe Kolbe are some recent titles published. Books under the imprint of LaNana Creek Press are in the collections of the Pushkin Museum, Moscow, Russia, Bodleian Library, Oxford University, the Victoria & Albert Library in England and the National Library of Taiwan, as well as many special collections libraries through out the United States. A trade edition of "Chopper Blues," an expanded version of an earlier fine press book, written and illustrated by Jones is in national distribution. Jones learned just last week that "Chopper Blues" won first prize in the 2013 International Book Awards in one category and was a finalist in another.

Jones has been an active exhibiting artist throughout his career with more than 30 one-person exhibitions in as many years. His solo exhibitions have been mounted at the Museum of Contemporary Native Arts, Santa Fe, N.M.; The Museum of Printing History, Houston; Tyler Museum of Art; the Museum of East Texas, Lufkin; Longview Museum of Fine Arts; and the Galveston Art Center. His exhibition "The Vietnam Suite" toured the Mid-West under the auspices of Mid-America Arts Alliance and toured Europe during 1987-88 with exhibitions in England, The Netherlands and France. His recent international exhibition record includes Novosibirsk, Nizny Tagil and Ufa, Russia, Paris and Rennes, France, England, Holland, Italy and Mexico. Jones was co-curator for "Octopus Dreams: Contemporary Native American Works on Paper," an exhibition sponsored by the American Consulate in Ekaterinburg, Russia, that toured museums through out the Russian Federation during the past year. This exhibition will open in Albuquerque, N.M., on June 29 after which it will travel to other venues in the United States and Japan.

Jones has been an active supporter of the SFA Friends of the Visual Arts for more than 15 years by providing original art work for the organization's scholarship fundraising auctions as well as making significant contributions to the efforts of establishing The Cole Art Center @ The Old Opera House in downtown Nacogdoches, according to Linda Mock, business manager for the School of Art.

"Without his support and encouragement, the FVA would not have been able to reach our goal of providing monetary assistance for students in the School of Art through grants and scholarships, as well as raising money for the renovation of the Cole Art Center," Mock said.

A senior art major at SFA, Rose, who grew up in Laredo, is studying printmaking with a minor in Spanish. In addition to the financial help the scholarship will provide, being nominated and selected as the first Jones Scholarship recipient has increased his confidence and enthusiasm for striving for greater achievement in his studies, he said.

"The scholarship is obviously a financial help," Rose said. "At this stage, all help in that area is appreciated and welcome. However, since I was nominated for this (and I'm not certain who did it), it is an incredible morale and confidence booster."

Rose plans to graduate next spring. He is working on a business idea he has titled Vagabond Industries.

"It is still in the infant planning stages," he said, "but, I hope to combine my love for art, music and travel into an entity to promote my work, the work of other artists and musicians, and eventually grow to something that can give back to students or kids who have a harder time reaching for their dreams."