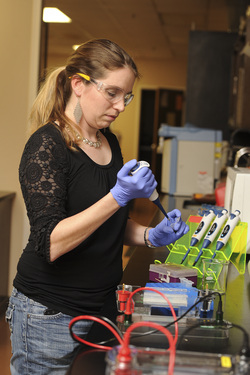 Baker has been selected by the American Society for Biochemistry and Molecular Biology to present her abstract and poster titled "Determination of the extent of hybridization between the threatened Hibiscus dasycalyx, Hibiscus laevis and Hibiscus moscheutos" at the ASBMB's annual meeting in Boston this month.

Baker has been conducting research on three species of hibiscus native only to East Texas. The U.S. Fish and Wildlife Service has listed the Hibiscus dasycalyx as threatened, but before the plant can be listed as endangered and government-funded restoration can occur, researchers need to show that it is a unique species and not a hybrid of laevis or moscheutos. In order accomplish this, Baker has been isolating genetic markers for each of the three species to show the extent of hybridization between the three plants and to prove that dasycalyx is a unique species that warrants restoration.

"Dasycalyx is disappearing at an alarming rate, and we hope that by conducting this research we will be able to restore it to its native habitat," said Dr. Beatrice Clack, SFA associate professor of biology and biotechnology.

"This is a pure native Texas plant species, and its natural habitat is along the tributaries of the Neches River. The plant produces a showy white flower with a deep ruby throat," Clack said. "Its common name is the Neches River rosemallow. At present, it's found at two conservation sites and at only a few remaining natural sites. Our goal is to restore it to its natural habitat and also make it available for use in the horticulture industry."

Baker said she considers her research an important step in saving the species. "The use of herbicides, mowing, grazing cattle and loss of wetland habitat have all contributed to this plant being threatened. We must strive to save this plant, which is endemic only to a few counties in East Texas." 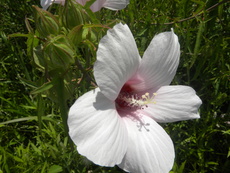