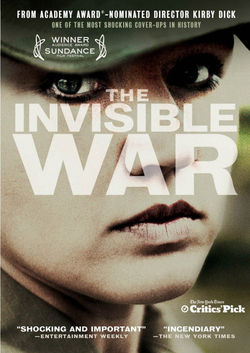 SFA will host a free screening of the award-winning documentary "The Invisible War." Image courtesy of Cinedigm/Docurama films.

At 6 p.m., former Navy servicewoman Rebecca Blumer will share her personal story of sexual assault while serving in the military. A recent exposé in Rolling Stone magazine titled "The Rape of Petty Officer Blumer" details Blumer's experience of being drugged and sexually assaulted.

Following Blumer's talk and a brief Q-and-A session, Lt. Col. David Miller, chair of SFA's military science department, will speak about his commitment to combating this issue. Afterward, there will be a screening of the Oscar-nominated documentary "The Invisible War," which highlights sexual assault in the military. A representative from counseling services will be available to talk with individuals during or after the film.

"This film clearly demonstrates that sexual assault, and its subsequent handling, is a problem in the military. The same can be said throughout society," said Dr. Dana Cooper, assistant professor of history and coordinator of gender studies at SFA.

"Rape often goes unreported because of the attached stigma. Those victims that are brave enough to report such a horrific experience are often blamed for the incident and thus victimized again," Cooper said. "Specific to a university setting, I want students to be aware of the prevalence of such occurrences. The sponsors of this program are committed to preventing future incidents any way we can."

Additionally, the program will sponsor a bra drive for the organization Free The Girls. The organization provides an opportunity for women rescued from sex trafficking to earn a living selling second-hand clothing. "Sexual assault is wrong whether it takes place in a military setting or university setting or as the product of a business transaction," Cooper said.

Donations of new and gently used bras, as well as a $1 donation to be used toward shipping, will be accepted at the film Monday evening and continue through Friday, March 8, at the following locations on campus: Dugas Liberal Arts North, Room 359; Griffith Fine Arts Building, Room 130; and the Involvement Center in the Baker Pattillo Student Center.