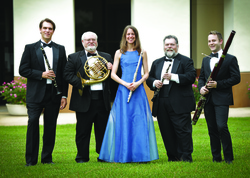 NACOGDOCHES, TEXAS - Music lovers in East Texas will have the opportunity to hear two concerts in April that showcase faculty ensembles of Stephen F. Austin State University's School of Music.

The Stone Fort Wind Quintet, the resident faculty wind chamber ensemble at SFA, will perform at 7:30 p.m. Tuesday, April 9, followed by "Coleidoscope," a collaborative recital, slated for 7:30 p.m. Thursday, April 11. Both events will take place in Cole Concert Hall in the Tom and Peggy Wright Music Building on the SFA campus.

The concerts are presentations of the SFA College of Fine Arts and School of Music and are featured events of the Cole Performing Arts Series.

The Stone Fort Wind Quintet's performance will feature three primary pieces in contrasting styles, according to Charles Gavin, professor of horn and chamber music at SFA. "Dance Suite" by Paul Valjean is a favorite among woodwind players and ensembles and was recently published. Although trained as a bassoonist, Valjean, who was a student at the Eastman School of Music during the 1950s, pursued a career as a dancer and choreographer in Copenhagan. He composed "Dance Suite" in 1955 for "The Bassoonists Ballet," a show organized by the Eastman School of Music bassoon students.

The concert's featured work is "A Year in the Catskills" by Peter Schickele, who Gavin describes as internationally recognized as one of the most versatile artists in the field of music. His works, now in excess of 100, are for symphony orchestras, choral groups, chamber ensembles, voice, movies and television.

"This piece is a musical portrayal of the changing season in the famous mountain area," Gavin said.

The quintet will also perform Quintet for Winds by Robert Muczynski.

SFA string, harp and wind faculty will collaborate in various chamber group settings performing music selections from the Baroque and Romantic periods when they present "Coleidoscope."

The repertoire for the concert will include a Baroque trio sonata, as well as works by Arthur Foote, often called the "American Brahms," and Guy Ropartz, a French Romantic composer, according to Jennifer Dalmas, associate professor of violin and viola at SFA.

"The 'Coleidoscope' concert is so named in honor of Ed and Gwen Cole, who have always been great supporters of chamber music in the East Texas community," Dalmas said.

Tickets for these performances are $5 for adults, $4 for seniors and $2 for students. For tickets or more information, call the Fine Arts Box Office at (936) 468-6407 or visit www.finearts.sfasu.edu.