SFA School of Theatre to present 'Romeo and Juliet' 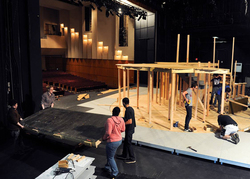 NACOGDOCHES, Texas - One of literature's greatest love stories will be set in a post-apocalyptic world when the Stephen F. Austin State University School of Theatre presents William Shakespeare's "Romeo and Juliet" Nov. 19 through 23 in W.M. Turner Auditorium on the SFA campus.

For more than six months, Scott Shattuck, director of the School of Theatre and the play's director, and Richard Ellis, visiting assistant professor of scenic design, have been actively working on the production and the set.

"Romeo and Juliet" has many scenes that take place in many different locales, which presents its own set of challenges, Ellis explained.

"In an effort to help keep the flow of the show moving, we made the decision of using a turntable, or revolve, as the major method of changing the scenery," Ellis said. "I have designed a sculptural unit set that will turn, giving a different view and location for many of the scenes.

"This will be supplemented by additional scenery that will fly in," he said. "While not unusual, this is something not often seen on a university level - at least not to this extent."

The student production crew has been constructing the set under the direction of SFA School of Theatre Technical Director Mark Porter, who has had many years of mechanized scenery experience and has engineered, planned and managed the construction of the massive set.

The steel structure was cut, welded, cast and assembled at the scene shop, which is located within the shell of the old SFA movie theater on North Street, then disassembled and moved to Turner Auditorium where it is being reassembled on stage.

"It was built from the ground up and is a fully automated turntable driven by a variable speed motor," Ellis said.

While having designed for many other Shakespeare's plays, this will be Ellis' first time designing for "Romeo and Juliet." In doing so, his research has been extensive, beginning last spring.

"I was looking for context and texture for Verona during the Renaissance and for all manor of information on time, place, architecture and the people who lived at that time," he said. "Through discussion with Professor Shattuck, we decided to move the production forward in time to a post-apocalyptic world.

"To this effort I grounded the set in the Italian Renaissance Gothic style and brought it forward through the industrial revolution with a stop in the mid- to late 1800s world of "Glass Palaces" until we reached a point where the past is echoed though this new apocalyptic world," Ellis said. 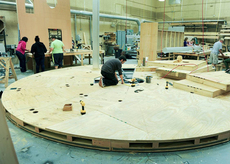