SFA School of Theatre to present Shakespeare's 'Romeo and Juliet' 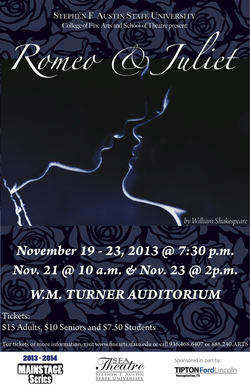 NACOGDOCHES - An upcoming Stephen F. Austin State University School of Theatre production of "Romeo and Juliet" may be especially inviting for area high school students who are engaged in a classroom study of this classic written by William Shakespeare.

One of literature's greatest love stories will come to life on the stage of W.M. Turner Auditorium Nov. 19 through 23 as part of the School of Theatre's Mainstage Series. Not only will the play attract Shakespeare lovers of all ages, this live production of "Romeo and Juliet" is the perfect accompaniment to a student's reading of the timeless story of star-crossed lovers penned by the English poet and playwright, according to Scott Shattuck, director of the School of Theatre and the play's director.

"We hoped that it would be helpful to local teachers and students to see a live production of such a widely studied play, and we've been gratified by the response so far," he said.

"We have a number of large groups from schools throughout East Texas attending that performance," she said.

The School of Theatre typically performs one of Shakespeare's plays every other year. This particular play was chosen primarily for audience appeal, but also because SFA theatre students' work in Shakespeare has been restricted to his comedies in recent years, Shattuck explained. It's also been 19 years since SFA presented "Romeo and Juliet."

"When I started to approach the play," Shattuck said, "I was most struck by the title characters' innocence and the fact that it takes their deaths to heal their rather sordid community, where petty old squabbles have made violence routine.

"I was also struck by the Capulets' fascination with social status and expensive parties and how that contrasts with their daughter's and Romeo's innocence," Shattuck said. "So we began to develop this dystopian world in which the kids are beacons of sweetness, which led me to the idea of a post-apocalyptic Verona that's both antique and futuristic. That seemed to inspire the designers to move in directions I've found very exciting."

As a result, this setting of "Romeo and Juliet" is in a time and place that has never existed "until we imagined it," Shattuck said, "incorporating some traditional imagery, a little cross-cultural flavor, and some contemporary and even fantasy elements."

Shattuck describes the show as fast-paced and surprisingly funny.

"Seeing the play acted out, with its spectacular sword fights, tender love scenes and suspenseful story not only makes the play easier to understand, it actually makes it gripping on a 'gut' level," he said. "I hope that skeptical students will be amazed by how much fun they have at the theatre."

This particular work had already been selected when Shattuck learned of a production opening this fall on Broadway as well as a large-screen version currently in movie theatres.

"Apparently, I was inspired by the same thing that prompted others around the same time to want to revisit this same story," Shattuck said.

For those currently studying "Romeo and Juliet," an educational enrichment page is available at http://www.theatre.sfasu.edu/programs.php?link=blog

The School of Theatre's Mainstage Series is sponsored in part by Tipton Ford Lincoln.