SFA to screen 'Henri Cartier-Bresson: The Impassioned Eye' on June 7 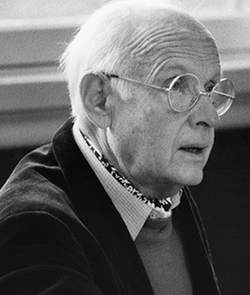 NACOGDOCHES, TEXAS - The Stephen F. Austin State University School of Art and Friends of the Visual Arts will present a one-night screening of "Henri Cartier-Bresson: The Impassioned Eye" at 7 p.m. Friday, June 7, at The Cole Art Center @ The Old Opera House. The free screening is part of the School of Art's First Friday Film Series.

In this 72-minute documentary directed by Heinz Bütler, Cartier-Bresson pulls out photographs, comments briefly, and holds them up to Bütler's camera, according to information at www.imdb.com.

A few others share observations, including Isabelle Huppert, Arthur Miller and Josef Koudelka. Cartier-Bresson talks about his travels - Mexico in the 1930s, imprisonment during World War II, being with Gandhi moments before his assassination, and returning to sketching late in life. He talks about becoming and being a photographer, about composition, and about some of his secrets to "capture the moment," the website says.

"For me, the camera is a sketchbook, an instrument of intuition and spontaneity, the master of the instant which, in visual terms, questions and decides simultaneously," the late Cartier-Bresson is quoted at www.henricartierbresson.org.

"To take a photograph is to hold one's breath when all faculties converge in a face of fleeting reality," he said. "It is at that moment that mastering an image becomes a great physical and intellectual joy."

Upon his death in 2004 at the age of 96, Cartier-Bresson was mourned as "the father of photojournalism."

The film series is sponsored in part by the Nacogdoches Junior Forum.