SFA to screen "Ride The Divide" at Cole Art Center 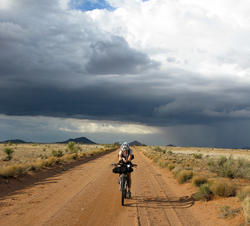 A free screening of "Ride The Divide" will be presented at 7 p.m. Friday, July 5, at The Cole Art Center as part of the SFA School of Art's First Friday Film Series.

NACOGDOCHES, TEXAS - As part of its First Friday Film Series, the Stephen F. Austin State University School of Art and Friends of the Visual Arts will present a free, one-night screening of "Ride The Divide" at 7 p.m. Friday, July 5, at The Cole Art Center @ The Old Opera House.

"Ride The Divide" is an award-winning feature film about the world's toughest mountain bike race, which traverses more than 2,700 miles along the Continental Divide in the Rocky Mountains. The film weaves the story of three characters' experiences with immense mountain beauty and small-town culture as they attempt to pedal from Banff, Canada, to a small, dusty crossing on the Mexican border, according to information found at www.ridethedividemovie.com.

It's the story of Mike, a 40-year-old family man who uses this challenge to chart a new course in life; Matthew, a leader in extreme endurance racing who's competing for his fifth time; and Mary, the first female rider to race this route, who will set out to accomplish what very few have been able to do. Over the course of a few weeks, they'll attempt to climb more than 200,000 vertical feet over the Rocky Mountains.

The Cole Art Center is located at 329 E. Main St. in downtown Nacogdoches. For more information, call (936) 468-1131. The First Friday Film Series is sponsored in part by the Friends of the Visual Arts and Nacogdoches Junior Forum.