SFA SRT students, from left, Thaddeus Franklin of Dallas, Ben Smith of Cincinnati, Ohio, and Nathan Wackett of Crandall are seen in the video they recorded that was selected as one of the Top 10 finalists in this year's Folgers® Coffee jingle contest. Online voting for the winning jingle is May 15 through June 19.

NACOGDOCHES, TEXAS - We've all heard it. We've all sung along to it, or replayed it in our heads. We've heard the award-winning Rascal Flatts, Aaron Neville and others sing it.

It makes us think of starting off our day on the right foot and with the right cup of coffee.

And the next group you hear singing the catchy jingle could be students in Dr. Kevin Kelleher's sound recording technology (SRT) program at Stephen F. Austin State University.

As one of the most memorable and recognizable pieces of advertising, "The Best Part of Wakin' Up is Folgers in Your Cup" jingle has helped millions of Americans start their day with the sounds, sights and smells of fresh-brewed Folgers Coffee.

The SFA students - Josh Birdsong of Port Neches, Nathan Wackett of Crandall, Thaddeus Franklin of Dallas, Cody Morris of Arlington and Ben Smith of Cincinnati, Ohio - submitted an entry earlier this year to the Folgers Coffee jingle contest, and it was selected by a panel of judges as one of this year's 10 national finalists. And now, the students need public support online to help them win the contest.

The public will assist in determining the winner of the grand prize of $25,000 and a chance to have the entry featured in a future Folgers commercial. This year, Folgers Coffee has partnered with multi-platinum recording artist Gavin DeGraw as the jingle spokesperson. Public voting at www.folgerscoffee.com began at noon Wednesday, May 15, and concludes at midnight Wednesday, June 19 - one vote per person, per day for the duration of the voting period.

Some of Kelleher's students entered the jingle contest two years ago, but they were not selected as finalists. His students last year had planned to enter the event again, but the contest wasn't held. Knowing his students' high level of talent, Kelleher remained persistent, and when he came across the dates for this year's promotion, he knew it would be a great opportunity for them.

"It was perfect; it's a real-world experience in addition to a great class assignment," he said. Entries are judged on creativity/originality, musical performance and adherence to the creative assignment. In the SRT program, students focus on areas such as these to earn a Bachelor of Music degree.

"To me, it's a win-win situation," Kelleher said, "because a lot of them are into songwriting, and we know that jingles are basically shortened songs, so they not only have to write the material, they have to record it. With the SRT program, it's nice to know that they can do both of those things, ultimately expanding their income potential."

SRT students watched previous winning jingles before they developed their own. One of the things that stood out immediately to Smith as he viewed the previous winners was "we can make a better recording than this." Birdsong and Smith first tossed around a few ideas and lyrics, and the end result viewers will find on the Folgers site is actually a refined fourth or fifth version of their efforts under the guidance of Kelleher.

After completing the writing phase of the jingle and coming up with the concept for the video, the five SRT majors collaborated with cinematography graduate students Herbert Midgley (director of the video and music technology instructor at SFA) and Peyton Paulette (lighting). The idea was to portray the students as college roommates, which they did in a house on the campus of SFA. It was filmed as the sun was going down, and they continued working into the night, but Paulette's use of lighting makes it appear as though there is early morning light streaming in through the windows.

Not only could the students, with the help of votes, win the $25,000 grand prize, but anyone who votes online will be eligible for a variety of prizes, ranging from a Folgers coffee mug, coffee for a year, Gavin DeGraw CDs, and iTunes gift cards. Along with those items, one grand prize of $10,000 will be awarded to a randomly selected winner drawn from people who simply register and vote for their favorite jingle.

"This exciting learning experience is useful for students preparing for careers as recording engineers," Kelleher said. "The five SRT majors even participated in a short biographical video that was filmed by a professional crew who followed them around Nacogdoches for a couple of days on behalf of Folgers, the results of which can be viewed when you go to vote. Support the students now by grabbing a cup of Folgers and casting your vote today at www.folgers.com." 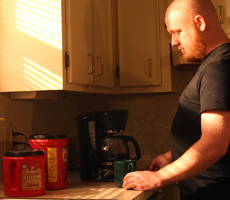 SFA student Ben Smith of Cincinnati, Ohio, served as the team leader in a class project in which SRT students made a video commercial they submitted to the Folgers® Coffee jingle contest. Their entry was selected as one of the 10 finalists nationally.