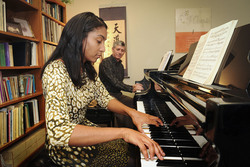 NACOGDOCHES - Long before Stephen F. Austin State University graduate student Martha De Luna ever took her first piano lesson in her home country of the Dominican Republic, her father told her he dreamed of his little girl becoming an accomplished pianist and playing with great orchestras.

It wasn't long before her father's dream became her dream, as well. She saw herself one day playing with a large orchestra in the United States, and some day performing with the National Symphony Orchestra of the Dominican Republic.

The first part of that dream has already come true. She has performed at SFA as winner of the concerto-aria competition. Last year, she was invited to perform as soloist with the Yakima Symphony Orchestra in Washington state. She was also chosen for the President's Award as Recitalist of the Year at SFA.

Now, on Oct. 23, she will perform with the National Symphony Orchestra of the Dominican Republic with her family watching in the audience. She will travel back to her home accompanied by her piano instructor, Dr. Andrew Parr, professor of piano at SFA, who will also conduct master classes for student pianists from three music schools in the capital.

"This trip will be a beautiful experience," De Luna said. "It is a blessing from God. I feel privileged."

De Luna began her musical study in her native Dominican Republic. Her family was poor, and they couldn't afford a piano for her to practice on. Each week, they made the hour-long trip to Santo Domingo for her piano lesson. The rest of the time she practiced at home on a keyboard drawn on top of a table in the kitchen of her family's home.

By the time she was 16, school officials where she took lessons felt she was so talented that they gave her a grand piano.

"I didn't have a piano for seven years," she said. "In my city, it was hard to find a piano. There were a few who had them, and there were some in churches. So I would just play the notes on the table.

"But I was always listening to the notes in my head, and sometimes I would sing to myself to realize what I was doing," she said. "All I can say is that God gave me something I can't explain."

Unable to advance in her piano studies further in the Dominican Republic, she went to a school in Puerto Rico where she learned she could qualify for a scholarship if she would agree to study harp. So she earned a degree in harp. Her uncle, who was a physician in Lufkin, brought her to East Texas for a visit, and Parr was asked to evaluate her talent and suggest where she might be able to continue her studies in the U.S.

"To play with this orchestra is one of my dreams," De Luna said. "And now, for it to be real, it reminds me of my dad's words.

"And it is happening sooner than I ever expected it to happen," she said. "My family will be a part of this, and for the first time, my brothers will see me play with an orchestra. And I'm also excited because my teacher is coming with me.

"In preparation, Dr. Parr has been working with me and giving me encouragement and confidence," she said, adding that she is happy Parr will be present to see her perform.

"I am pleased to be able to be present at the concert," Parr said. "Martha is a very special pianist who has the ability to communicate with her audience. She also learns very quickly and has a faultless memory for music.

"I would say she is the most gifted person I have taught in 30 years at SFA," he said. "She also composes in various genres and writes elaborate arrangements of hymns for piano."

In addition to performing the Liszt Hungarian Fantasy for Piano and Orchestra, De Luna will also perform a Handel Harp Concerto during the same concert. Additionally, Dr. Tim King, director of choral activities at SFA, has programmed one of her choral compositions for the upcoming A Cappella Choir concert slated for 7:30 p.m. Thursday, Oct. 24, in Cole Concert Hall.

De Luna hopes her story will encourage and motivate other musicians who come from humble beginnings to work hard and pursue their dreams.

"I am very thankful for Dr. Parr and for SFA in my life," De Luna said. "The big dreams (coming true) in my life started here."