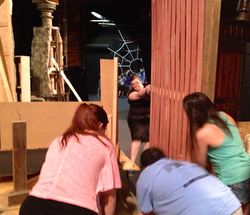 SFA School of Theatre student Bridgett Ochoa, center, is assisted by other students in changing out the sets for "Charlotte's Web" and "Godspell," the featured shows in the 2013 Summer Repertory season at SFA.

NACOGDOCHES, TEXAS - What audiences will see on stage in Tuesday's performances of "Charlotte's Web" and "Godspell" in W.M. Turner Auditorium on the campus of Stephen F. Austin State University is just the most visible part of the action at the SFA School of Theatre.

There is plenty of creativity and artistic skill behind the scenes and in set, lighting, costume and sound design. And with two different shows performed today as part of the 2013 Summer Repertory season, a lot will happen between curtain calls.

The ability to move the different sets "as quickly and as effectively as possible" is important, according to Richard Ellis, visiting assistant professor in scenic design in the School of Theatre.

"They have to move easily, meaning they either fly or are on casters," Ellis said, further explaining that there is a series of pipes on pulleys above the stage by which pieces of the sets are hoisted out of audience view. Other parts of the sets are on wheels to move on and off stage quickly.

"The bulk of 'Godspell' is on wheels and travels as a big unit," Ellis said, adding that he knew early on that particular show would require a series of platforms or stairs.

Ellis described the two shows and their sets as "dramatically different," with "Charlotte's Web" somewhat based in reality and "Godspell" allowing for a great deal of flexibility. The use of different levels provides interesting ways to place people on stage.

Ellis said he is pleased with both sets and how quickly they can be changed. In previous years, some Summer Rep scene changeovers would take around two hours or more. But the first changeover from "Charlotte's Web" to "Godspell" took only 53 minutes.

"But that's part of the magic of theatre," he said. "Our schedule is so compacted this year. Had set change taken three to five hours, we could have done it, but it would have gotten old quickly."

"Charlotte's Web" is the story of a lonely little pig named Wilbur who becomes a local sensation on Zuckerman's farm thanks to the efforts of his new best friend, a kind and generous spider named Charlotte. The play, adapted for the stage by Joseph Robinette, is based on E.B. White's beloved classic novel, which teaches young readers about the power of belief and the meaning of true friendship.

Based on the Gospel According to Matthew, "Godspell" is a high-energy musical highlighting biblical parables, with Jesus preaching kindness and love to a new generation. The musical features storytelling with clowning, vaudeville and pantomime along with a score that ranges from pop to rock to blues to gospel.

All performances are in Turner Auditorium, located in Griffith Fine Arts Building on the SFA campus.