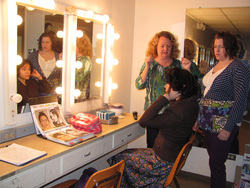 Angela Bacarisse, professor of costume and makeup design at SFA, and Houston senior Megan Thomas, wardrobe crew member for the this week's production of "Stage Door," assist La Joya senior Crystal Villarreal with a 1930s hair style as she prepares for her role in the play slated for 7:30 p.m. Tuesday through Saturday, Feb. 26 through March 2, in W.M. Turner Auditorium.

NACOGDOCHES - The glamour of the 1930s will be recreated on stage when the Stephen F. Austin State University School of Theatre presents "Stage Door" for a five-night run this week beginning Tuesday in W.M. Turner Auditorium as part of the SFA College of Fine Arts' University Series.

The play, by Edna Ferber and George S. Kaufman, is set in 1936 at The Footlights Club, a boarding house for 16 actresses who have come to New York to pursue their dreams of being on Broadway.

To prepare the students for the challenge of re-creating the elegant style of the '30s, Angela Bacarisse, professor of costume and makeup design at SFA, paired each student actress with a photograph of a movie actress of that era so that each could model hair, makeup and certain "signature" gestures after the star.

"I'm trying to pull in the physicality of the '30s," Fultz said, "in the way the women behaved and moved and carried themselves. If you watch old movies, the essence of women was very different then than now. The way we carry ourselves now is very casual. They were very 'lifted,' and everything was up in the chest area."

Fultz has been practicing carrying herself in this manner not only in rehearsals, but also by "going home and walking around in my house for two hours with heels on," she said with a laugh.

With a cast of 33, finding space for all the costumes and cast members who will be changing into them in the available dressing rooms beneath Turner Auditorium is another challenge.

"I have 11 men in the VIP dressing room, and approximately 12 women in each of the big dressing rooms," Bacarisse said with a laugh. "There are 90 costumes, so it's one of the bigger shows we have done."

Having designed costumes for many plays set in this time period over the years, Bacarisse said her job with "Stage Door" was "super easy, in comparison to having to start from scratch and build everything, but it was still a lot of work." The costumes reflect the elegance of the era.

"These are real people in real space; the set is gorgeous," she said. "The clothes have to look just as real. They can't look 'costumey.'"

"We were very grateful to receive that donation and right in the nick of time, too," she said.

Because the men and women of the 1930s typically wore hats, "we have a lot of hats," Bacarisse said.

"That has been the biggest organizational challenge for the costume shop," she said. "Almost every actor has a hat at some point in the play. The women in the show have had to learn about wearing hats and gloves and carrying purses instead of backpacks."

Just before the holidays, the costume shop received a donation of several hats, three of which are in the show.

"One of my grandmother's hats is in the show," Bacarisse said. "I had it in a box in my office, just waiting for that perfect opportunity to use it."

The nostalgia of the play

"It's like looking at a photograph of your mother or grandmother when they were young," she said, adding she hopes she hears from theatre patrons comments like "oh, my mother looked just like that."

"That's one of the things I love about sitting in the audience at intermission or walking out after a play is over," she said. "When you hear those kinds of comments, that's how you know you got it right."

A joint presentation of the College of Fine Arts and School of Theatre, "Stage Door" can be seen at 7:30 p.m. Tuesday through Saturday, Feb. 26 through March 2, in Turner Auditorium.

Jack Heifner, SFA's playwright in residence, is the play's director. Before Tuesday's opening night performance, there will be a 7 p.m. informative talk presented by Heifner in Griffith Gallery, located across the hall from Turner Auditorium. The audience is invited back to the gallery for a post-performance reception to honor the event's corporate sponsor, Tipton Ford Lincoln.