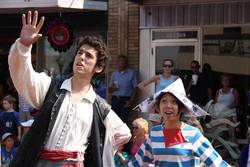 SFA theatre students Nick Pinelli, junior from The Woodlands, and Mai Le, senior from Nacogdoches, perform during last year's Texas Blueberry Festival. This year's festival performance on June 8 will feature songs from the popular musical "GODSPELL," which is part of the School of Theatre's 2013 Summer Repertory season.

NACOGDOCHES, TEXAS - Students in the Stephen F. Austin State University School of Theatre will add another element of excitement to all the fun those attending the Texas Blueberry Festival will experience June 8 in downtown Nacogdoches.

Theatre students will appear in costumes of princes, princesses and other characters from fairy tales and favorite childhood classics during the all-day festival. Children (and adults) will have the opportunity to talk with the students and take photos with them, according to Angela Bacarisse, professor of costume and makeup design at SFA. The School of Theatre's trademark dragon character, Schlaftnicht, from the children's show "Trudi and the Minstrel," performed the summer of 2005, will make his annual Blueberry Festival appearance.

Additionally, the festival crowds will get a sampling of the upcoming performances of the popular musical "GODSPELL," which is part of the 2013 Summer Repertory theatre season for the SFA School of Theatre. Students will perform "Prepare Ye the Way of the Lord," featuring Joshua Lopez, sophomore from Dallas, and "Save the People," featuring Cody Davids, junior from Magnolia.

The other Summer Repertory offering this year is the classic children's story "Charlotte's Web." The summer season runs from June 27 through July 13 with varying performance times and dates. Visit www.boxoffice.sfasu.edu or call (936) 468-6407 for detailed information.

The students perform at the Blueberry Festival each year to "let the community know that the SFA School of Theatre offers good quality family entertainment at affordable prices to our neighbors in Nacogdoches," according to Bacarisse.

The annual summer theatre season at SFA provides something for the entire family to enjoy "as an alternative to television," she said.

The festival performances will be in front of The Cole Art Center @ The Old Opera House at 329 E. Main St.