SFA's Orchestra of the Pines to present 'A Dramatic Soiree' 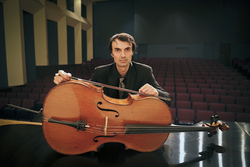 Dr. Evgeni Raychev, cello instructor at SFA, will join the Orchestra of the Pines in concert at 7:30 p.m. Monday, Oct. 7, in Cole Concert Hall on the SFA campus.

NACOGDOCHES, TEXAS - The Stephen F. Austin State University School of Music will present the Orchestra of the Pines in concert at 7:30 p.m. Monday, Oct. 7, in Cole Concert Hall on the SFA campus.

Joining the Orchestra of the Pines will be Dr. Evgeni Raychev, instructor of cello at SFA, as a guest performer as the ensemble presents "A Dramatic Soiree," according to Dr. Gene H. Moon, director of orchestras at SFA.

Raychev agreed to the performance invitation only recently after the originally scheduled guest artist, the 2013 Schmidbauer Competition winner Hans Goldstein, could not join the orchestra for the concert due to injury, Moon explained.

"It is providence that we have such a talented cellist in our midst that can be at the ready to provide us with his immense talent and his time," Moon said. "We look forward to Dr. Raychev's performance with the SFA Orchestra of the Pines."

Among the works to be performed is the "L'Arlesienne Suites" by Georges Bizet.

"This is one of the composer's most well-known works," Moon said. "The two suites contain music that will be familiar to many. A collection not played often enough, the music fits well as the introduction to the hefty second half of the concert."

During the second half, Raychev will join the orchestra in performing the Cello Concerto in B Minor by Antonin Dvorak.

"The concerto is regarded as one of the most popular in the cello concert repertoire," Moon said. "The work's melodies are memorable and mesmerizing!"

This performance of the Orchestra of the Pines is part of the School of Music's Concert Series.