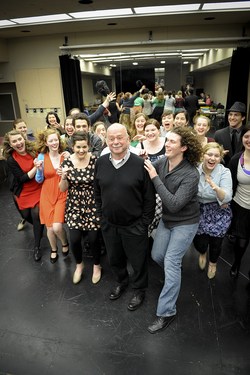 The student cast of "Stage Door" surround their director, Jack Heifner, the SFA School of Theatre's playwright in residence, during a recent rehearsal for the production set to open at 7:30 p.m. Tuesday, Feb. 26, in W.M. Turner Auditorium on the SFA campus. The play, by Edna Ferber and George S. Kaufman, runs nightly through Saturday, March 2.

NACOGDOCHES - Stephen F. Austin State University theatre students are learning about life in New York City in the mid-1930s, when the average cost of a new house was $3,925, a Studebaker cost $665, and you could put gasoline in that car for about 10 cents a gallon.

Prominent actresses of the time were Katherine Hepburn, Ruby Keeler, Ginger Rogers and Joan Blondell. The Great Depression was still lingering, with unemployment continuing to fall to 16.9 percent. So for young women of this era, especially those who were poor, who aspired to become Broadway actresses, to say it was a challenging time would be an understatement.

That's the premise behind "Stage Door," the play by Edna Ferber and George S. Kaufman that's set in 1936 at The Footlights Club, a boarding house for 16 actresses who have come to New York to pursue their dreams of being on Broadway.

In preparation, the students have been watching movies of the 1930s, such as "42nd Street" and "Goldiggers of 1933," "because they are both about the theatre in New York at that time," said Jack Heifner, SFA's playwright in residence and the play's director.

But one movie Heifner doesn't want the students to see is the movie version of "Stage Door."

"I don't want them to start copying performances from the movie, even though the movie is only about one-third of the play," he said, adding that the famous Hepburn line, "The calla lilies are in bloom again" is not in the play, not to mention that Kaufman scorned the movie as "Screen Door."

But beyond educating the students about the 1930s, Heifner hopes the play gives the young actors a glimpse into an era that will be remembered for its style and grace and as a time that was good for Broadway, because people were searching for something uplifting.

A 17-page glossary of terms from the time period was created for the students to study. Manners and style are topics of discussion in rehearsals. Angela Bacarisse, professor of costume and makeup design at SFA, paired each student actress with a photograph of a movie actress of that era so that each could model hair, makeup and certain "signature" gestures after the star.

"Unlike today, most women in the 1930s wore hats, gloves, dresses, high heels and full make-up every time they went out of the house," Heifner said. "Men wore suits, ties and hats. It was a dressy time, even though the United States was still in the middle of the Great Depression."

But dressing up for an audition for a Heifner-directed play is nothing new at SFA.

"The word gets around, that when the actors here come to my auditions, for anything, they dress up," he said. "It's a job interview. They should look their best and sell themselves.

"A lot of people go into show business thinking they want to be an actor - that it's just about acting," he said. "It's about selling, making contacts and marketing. That's part of the reality of this business and of this play."

One of the greatest challenges in directing "Stage Door" is the large cast - 33 characters - "so it's as large as a musical," Heifner said. But he's getting a lot of help, he said, including from senior theatre major Benn May from Commerce, who has been working with the cast to develop their characters. Choreographer Juanita Finkenberg and her assistants are instructing students in posture, movement and style of the period, while stage manager Jennifer Sims, junior theatre major from Garland, and her assistants are "taking care of the logistics of making this huge show happen," Heifner said.

"The biggest challenge has been staging the play," he said. "The brilliant costume, set, lighting and sound designers are all contributing to the look and atmosphere of the production.

"We are trying to be authentic to the period," Heifner said. "As always, theatre is a collaboration of everyone involved onstage and backstage."

NACOGDOCHES - He considers New York City his home. But for one semester each academic year, Jack Heifner, playwright in residence for Stephen F. Austin State University's School of Theater, finds himself back in Nacogdoches teaching play, screen and television writing at SFA.

He also finds himself directing aspiring actors, who he says "inspire me to be a better teacher."

"I love writing and teaching, so coming back to SFA allows me to do both," Heifner said.

This semester, he's directing "Stage Door," which opens at 7:30 p.m. Tuesday, Feb. 26, in W.M. Turner Auditorium and runs for five nights. It's part of the SFA College of Fine Arts' 2012-2013 University Series. The play is written by Edna Ferber and George S. Kaufman.

Heifer is probably best known for his play "Vanities," which ran for five years in New York and became one of the longest running plays in off-Broadway history.

"When I'm not at SFA, I am working as a professional writer," he said. "Sometimes, I am working on a new play or movie. In recent years, I was working on the musical version of my play 'Vanities.' We were doing productions of the musical in Palo Alto, Pasadena, New York and Seattle." Samuel French will publish the show this year, and the music is available on CD.

Heifner was recently hired to write the book of a new Broadway show, and he's always working on some project of his own. He is also the author of "Patio/Porch," "Natural Disasters," "Running on Empty," "Home Fires," "Heartbreak," "Comfort and Joy," "The Lemon Cookie," "Earth to Bucky," "China Dolls" and other plays and musicals produced in New York, Los Angeles and theatres around the world.

Heifner is the director of "The Festival of New American Plays" at SFA featuring works by major American playwrights. At SFA, he has directed "Home Fires," "The Seagull," "The Member of the Wedding" and "How to Succeed in Business Without Really Trying."