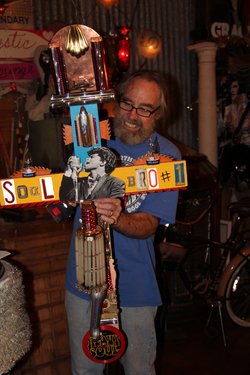 Nacogdoches artist Wally Knight works on his Day of the Dead altar that will be among other altars on display as part of the "Día de los Muertos: Art of the Living and the Dead" exhibition showing from Nov. 1 through Jan. 4 at The Cole Art Center @ The Old Opera House in downtown Nacogdoches.

NACOGDOCHES, TEXAS - The Stephen F. Austin State University College of Fine Arts and School of Art will present the exhibition "Día de los Muertos: Art of the Living and the Dead" from Nov. 1 through Jan. 4 at The Cole Art Center @ The Old Opera House as part of the 2013-2014 University Series, "Live Out Loud."

The exhibition, featuring 13 altars created by North and East Texas area artists and "non-artists," will explore traditional Day of the Dead observances through different cultural, ethnic and religious/non-religious perspectives, according to John Handley, SFA galleries director. The exhibition, which will be displayed in the Ledbetter Gallery, will open with a reception from 6 to 8 p.m. Friday, Nov. 1, at Cole Art Center.

The Day of the Dead altars, which celebrate the lives of those who have passed on, will be created in a variety of media, made by both trained and untrained artists, Handley said.

The Day of the Dead observance is considered a cheerful celebration of life, honoring the souls of the deceased. Day of the Dead, or Día de los Muertos, is a Mexican term derived from the Roman Catholic All Saints' and All Souls' days, traditionally observed Nov. 1 and 2. An array of activities, ranging from decorating graves to creating home altars, typically highlight the celebration that can last for days.

Patrons will see a variety of altars, some more conceptual and some that might not seem like an altar at all but are the artist's interpretation, Handley said. Some of the altars will have interactive components, including sound and light, and some will be several feet in dimension. There will also be a community altar where visitors will be encouraged to pin a small (non-returnable) copy of a photograph of a deceased relative or friend, and also write a short memento about them, Handley said.

Day of the Dead masks created by Lufkin High School students will also be displayed.

In a separate but related event, the SFA Friends of the Visual Arts will host a Day of the Dead Fiesta and Fundraiser on the night of Nov. 9, the same night as the opening of an exhibition of the work of artist John August Swanson in the upstairs Reavley Gallery at Cole Art Center.

The Swanson opening will feature a presentation from 6 to 7 p.m. on Day of the Dead traditions by Drs. José N. Recinos and Gabriela Miranda-Recinos of SFA's Latin American Studies Program. The fiesta and fundraiser will begin at 7:30 p.m. and will feature music and traditional Hispanic food to accentuate the Day of the Dead altars on display in the downstairs Ledbetter Gallery.

The fundraiser, which takes the place of the Hooked on Art fundraiser, will benefit both The Cole Art Center and School of Art student scholarships. An art auction will feature papier maché Day of the Dead sculptures and skulls, Day of the Dead masks, two-dimensional art such as paintings or woodcut or linocut prints in various themes, and jewelry.