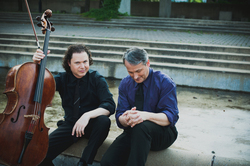 O'Riley and Haimovitz join together to explore the lyrical and virtuosic properties of their instruments in a collaboration that crosses in and out of the classical and pop music genres. The program showcases the artists' talents as collaborators and soloists, and audiences will hear works of Bach and Gabrielli, Radiohead and Arcade Fire, Piazzolla and Stravinsky. A double CD recording, on Oxingale, was released in the fall of 2011 to rave reviews, according to Baylin Artists Management.

O'Riley hosts the popular National Public Radio music program, "From the Top," and he has released a set of highly regarded recordings of the music of Radiohead, Nick Drake and others. He studied with Russell Sherman at the New England Conservatory of Music.

"Christopher O'Riley is recognized as one of the leading American pianists of his generation," Goodall said, "touring extensively as a recitalist and chamber musician and appearing with every major orchestra."

Haimovitz made his debut at 13 as a soloist with Zubin Mehta and the Isreal Philharmonic. By age 17, he made his first recording for Deutsche Grammophon with James Levine and the Chicago Symphony Orchestra.

"He has re-defined what it means to be a classical musician today," Goodall said, "bringing concerts of Bach, Golijov and others to clubs and coffee houses across the country while maintaining a busy schedule of international appearances."

Prior to the concert, there will be a 7 p.m. informative talk about the artists and their music to be presented by Dr. Evgeni Raychev, SFA adjunct cello professor, in Griffith Gallery located across the hall from Turner Auditorium. The audience is invited back to the gallery for a post-performance reception to meet O'Riley and Haimovitz and to honor the event's corporate sponsor, Cataract, Glaucoma & Retina Consultants of East Texas/Benchmark Optical.