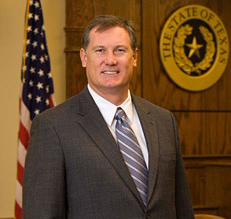 Clardy, a Nacogdoches small business owner and attorney, recently finished his first term representing House District 11, which includes Cherokee, Nacogdoches and Rusk counties. He obtained his bachelor's degree from Abilene Christian University and graduated from Pepperdine University School of Law, where he assisted with the Pepperdine Law Review from 1986 to 1988.

Clardy is a Paul Harris Fellow at the Nacogdoches Rotary Club and a member of the American Board of Trial Advocates, and he has served on the executive board of the East Texas Boy Scouts. He also is an active member of the North Street Church of Christ and serves on the Alumni Advisory Board for Abilene Christian University.

Clardy currently serves on the state Higher Education, Local and Consent Calendars, Special Purpose Districts, and Redistricting committees. As a freshman legislator during the 83rd session of the Texas Legislature, he authored and guided the passage of 10 bills.

Recently, Clardy received the Legislator of the Year Award from the Texas Civil Justice League, the nation's oldest and largest state legal reform organization. He also earned the Courageous Conservative Award presented by the Texas Conservative Coalition and, along with his wife Judy, earned the 2012 Winners Circle Award given by the Dean's Circle for SFA's College of Fine Arts.

Clardy said he is honored to deliver the commencement address for the university. "SFA means a lot to me, as well as East Texas," he said. "I look forward to sharing my wisdom with the next generation of leaders."

Clardy also said he encourages the graduating students to identify their talents and skills, as well as be passionate about their chosen career paths.

Commencement exercises will be split into two ceremonies for fall graduation, and Clardy will provide the commencement address at both ceremonies.