Strumming through the chords of life 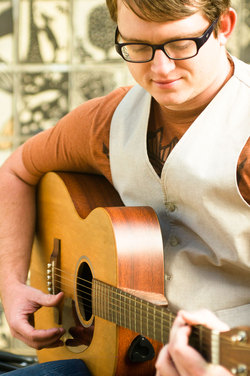 He's reached more than a thousand views on his YouTube channel and Crisp won 'Singer/Songwriter of 2013' as well as the 'Single of the Year' award by the East Texas Music Awards. He's also performed over 15 solos this year alone.

Crisp's secret to pulling heartstrings is in his lyrics.

"My songs are straight forward. What you see is what you get," Crisp, a senior majoring in kinesiology, said.

Crisp wrote the song that led to his success after mourning the death of his childhood friend in January. While paying his respect to 20-year old Brandon Goyne, Crisp wrote and recorded "See You Again" in one night.

Filling in music notes with words and memories shared by the two, the video quickly reached over 4,000 views. The song sparked a flame of music followers.

"He loves to write and sing, and he has come a long way just this year," Nathan Hunnicutt, founder and producer of the ETX Music Awards, said. "He's a true artist."

Hunnicutt, who met Crisp this year, became impressed with his talent during the nomination process for the ETX Music Awards, a 100-percent fan-generated contest. Crisp was going against some solid competition in the final round, which is where Hunnicutt witnessed Crisp's desire to connect with his audience.

"I enjoy being in front of people," Crisp said. "I'll be singing, in the middle of a song and people will walk up to me and start talking… it's just fun."

Although the tribute song to his close friend gave wheels to Crisp's music career, the credit for strumming his first music chords on an old guitar began in 2007.

"I broke my knee playing football and lying in bed I couldn't do anything else so I picked up the guitar," Crisp said. "Music just started happening, and I'm letting things fall into place."

By Christmas of that year, Crisp's parents gave him a shiny new guitar and he became deeply involved in youth group bands.

Now, Crisp has written over 40 songs, sketched his first album set for spring 2014 and has put together his band. He continues to deliver his lyrics on stages across East Texas, while his other well-known songs like "Mr. Tequila" and "Austin" are gaining popularity.

While carrying his talent to various venues and bars, Crisp has been moved on to the next voting round to sing the National Anthem at the Valero Alamo Bowl for the "Stars & Stripes" contest. Winning this opportunity will open doors for Crisp to perform in front of a 60,000 audience.

Today, wherever he goes the guitar follows, as well as his passion to entertain and connect with his fans.

"He has the right ingredients to do whatever he wants to do. After all, I think that is exactly what he's doing," Hunnicutt said.

Crisp will be graduating spring 2014 and has high hopes to continue his musical journey.