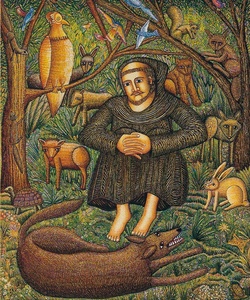 The work of John August Swanson will be exhibited in Reavley Gallery in Cole Art Center from Nov. 9 through Jan. 11. The opening at 6 p.m. Nov. 9 precedes the Day of the Dead Fiesta and Art Auction fundraiser presented by the SFA Friends of the Visual Arts, which begins at 7:30 p.m.

NACODGOCHES - The Stephen F. Austin State University College of Fine Arts and School of Art will present the work of John August Swanson in an exhibition showing Nov. 9 through Jan. 11 in Reavley Gallery in The Cole Art Center @ The Old Opera House in downtown Nacogdoches.

The Swanson exhibition is part of the College of Fine Arts' 2013-2014 University Series, "Live Out Loud."

"Swanson is a highly accomplished print maker working primarily with serigraphs (silkscreen)," said John Handley, director of the SFA galleries. "His complex scenes contain amazing detail and up to 50 colors, meaning a different stencil for each color."

Swanson, whose parents were Mexican and Swedish, explores Hispanic folklore, ritual, the Bible, the circus and the opera in his prints, which have a strong narrative quality, according to Handley. His narrative is positive and uncomplicated, easy to understand and optimistically embracing life and one's spiritual transformation, Handley explained.

"I first met Swanson while working on a project with Loyola Marymount University in Los Angeles," Handley said. "A group of us were invited to a panel discussion on Swanson's work that explored the theological dimensions of his subject matter. I had seen reproductions of his work in magazines but had never seen them up front and personal. I was floored by the minutia of detail and the way the paint builds up on the surface.

"His work has terrific public appeal - ideal for families who want to see a special exhibition that children will enjoy," he said.

The Swanson exhibition will open with a presentation by Drs. José N. Recinos and Gabriela Miranda-Recinos of SFA's Latin American Studies Program speaking from 6 to 7 p.m. Nov. 9 on Day of the Dead Traditions. Showing at the same time in Cole Art Center is the exhibition "Día de los Muertos: Art of the Living and the Dead," which features Day of the Dead altars created by North and East Texas artists and community families.

The subject of the Day of the Dead has long fascinated people throughout history, according to Miranda-Recinos.

"The fascination with this subject has always been present throughout history, and it has manifested itself in many different ways and flourished with many different faces and in many different cultures," she said. "We do not speak for the Cole Art Center's Gallery and its director, but the upcoming exhibit definitively has the intention to approach how in the United States many cultures are adopting Dia de los Muertos as their own. As cultural historians, what we have witnessed is not only different cultures adopting this tradition, but also corporations have had a big influence in promoting the mainstreaming of this costume as a commercial festivity."

Following the presentation, The Friends of the Visual Arts will host a Day of the Dead Fiesta and Art Auction fundraiser benefiting The Cole Art Center and student scholarships. The outdoor fiesta starts at 7:30 p.m. on the streets around Cole Art Center and will feature music, dancing and traditional Hispanic food to accentuate the Day of the Dead altars on display inside the art center. An art auction and raffle featuring unique creations made by many local artists will be offered inside the art center. Auction items include paintings by area favorites, such as Charlie Becker, Barbara Richert, Byron Lacy and recently retired SFA art Professor Robert Kinsell. The SFA Art Alliance will also sell small art objects they created as well as Day of the Dead T-shirts.

Earlier in the evening, the annual Downtown Art Walk is scheduled from 4 to 8 p.m.

The Day of the Dead Fiesta fundraiser replaces the "Hooked on Art" ornament event previously held annually in early December.

The Day of the Dead exhibition and the Swanson exhibition are made possible in part by a grant from Humanities Texas, the state affiliate of the National Endowment for the Humanities.