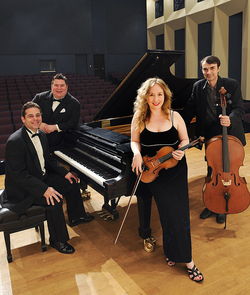 NACOGDOCHES, Texas - The Stephen F. Austin State University College of Fine Arts and School of Music will present The Alazan Trio in concert at 7:30 p.m. Tuesday, Sept. 30, in Cole Concert Hall on the SFA campus as part of the Cole Performing Arts Series.

"His music has been performed by the New York Philharmonic, at the Beijing Olympics and throughout the world," he added.

"Reveille" premiered in 2011 in New York City by the Kalichstein Laredo Robinson Trio and Sting. It was dedicated to 9/11 World Trade Center victim Herman Sandler by a collection of people who were personally involved with him, including Silverman's son, Ben, the commissioner, Sting, Sandler, who was a primary supporter of the Rainforest Foundation concerts at Carnegie Hall, and Joseph Kalichstein, pianist and a recipient of early support from Sandler's Family Foundation.

"The composition itself was influenced, not so much as a 'portrait' of the subject, but by historical references to feelings Ben and I experienced due to the tragic event," Silverman has said of the piece. "It was as a family friend that I have the most cherished memories of Herman. Our children were classmates from grade school through college, and he was a mentor and important influence on my son Ben."

The piece has six contrasting movements and is unique in that the fourth movement is scored for violin, cello, piano and tenor, Petti explained. "This is an unusual combination in piano trio literature," he said. "Also of interest is that the last movement is a series of variations based on the popular tune 'You Can Call Me Al' by Paul Simon."

Also on the program are works of Leonard Bernstein and Leo Sowerby. 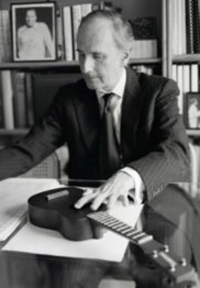