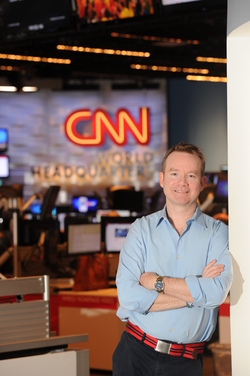 The person who has influenced Hrubesh most is CNN founder Ted Turner. "Shortly after starting my career at the cable channel, I began to adopt Ted's views of the world," he said. "He inspired me to recycle, eat bison and reduce my carbon footprint." Photos by Hardy Meredith

The most important thing senior CNN editor/producer Chris Hrubesh says he learned at Stephen F. Austin State University was not how to operate a camera, conduct an on-air interview or record crystal clear audio. It was to never, ever give up on your dreams.

The lesson came from his TV ad sales instructor Mark Zindler (son of legendary TV personality Marvin Zindler) who Hrubesh says changed his life one class day by sharing a quote from U.S. President Calvin Coolidge. It read, "Nothing in the world can take the place of persistence" and went on to say that not even talent, genius or education is more important than persistence and determination in achieving one's goals.

That principle has guided Hrubesh throughout his award-winning 25-year career at CNN, beginning with the manner in which he first managed to get hired by the groundbreaking Cable News Network as a naïve 23-year-old with no professional journalism experience.

"I had applied to and been turned down by at least two dozen television stations in Texas because, unlike most of my competition, I didn't have any internships on my résumé," the 1988 SFA graduate recalled. "I was just about to give up working in TV when my aunt revealed that she knew a guy at CNN. He hand-delivered my résumé to numerous CNN managers, but I only received more rejection letters. I never gave up hope, and then one day, my friend told me about a job opening in the video library. He warned me the pay was low and the work was mundane, but it would be my foot in the door."

In a matter of days, Hrubesh had moved to Atlanta, Georgia, and was working as a video archivist at CNN. To supplement his low wages, he also was employed by a temp agency, doing everything from accounting to substitute teaching. Within a year, he was promoted to video journalist at CNN, operating studio cameras and teleprompters. After a short stint at CNN Spanish as a camera operator and video editor, he landed a spot as a video editor for Headline News. In his current position as senior video editor, Hrubesh edits stories daily for CNN, HLN, CNN International, CNN.com and CNN Spanish, occasionally shooting and producing his own stories. He frequently does work for "The Situation Room with Wolf Blitzer," "Jane Velez-Mitchell" and "Dr. Drew."

"About the only thing that is typical about my day at CNN is I work from 2 to 10 p.m.," Hrubesh said. "I edit every kind of story from human interest to weather to sports. One of the best parts of my job is that I get to learn something new every single day."

"The greatest part of being in this field is that I get to be an eyewitness to history and get access to people most will never get to meet," Hrubesh said. "Whether it's flying on Air Force 2 with then-Vice President Al Gore or interviewing Priscilla Presley at Graceland, my CNN badge has opened doors that I never dreamed possible."

A graduate of Alief Elsik High School near Houston, Hrubesh transferred to SFA from another Texas university and briefly studied environmental science before changing his major to communication. He has very fond memories of living in Mays Hall where he served as the dorm's president his junior year. He said his proudest SFA accomplishment was helping establish a scholarship in memory of two Mays Hall residents, Craig Williams and Robert Maluski, who died in a car crash. The scholarship continues to provide financial assistance to Mays Hall residents.

Hrubesh was a member of the SFA Judo Club and eventually earned his black belt. He also was involved in theatre, appearing in a handful of SFA productions. While working at SFA-TV2, he anchored the news, produced shows and portrayed "The Wacky Weather Guy," a television personality of his own creation. It took Hrubesh five and a half years to graduate "because I loved SFA so much," but he eventually earned his Bachelor of Arts in radio/TV.

"At SFA, I was given the freedom and encouragement to write scripts, report, edit, shoot, produce and go on air, whereas many of my colleagues say they weren't allowed to touch a camera until their senior year of college. I felt very confident from the time I got here in my shooting and editing skills and was far more experienced than most of my entry-level colleagues at CNN."

He had to rely heavily on his SFA training - and his favorite Calvin Coolidge quote - when he was asked to travel to Saudi Arabia to help cover the Gulf War for CNN in 1991. It was his first international trip, and it almost didn't happen because of a last-minute problem with his passport and then an unfortunate misunderstanding that resulted in him spending several uncomfortable hours in customs with Saudi authorities who spoke only broken English. The war pre-dated cell phones and email, so he was on his own until the issue was resolved, and he eventually joined his colleagues on the ground in the war zone. Soon he was part of a news crew convoy moving into Kuwait past burning oil fires, an experience Hrubesh described as "dangerous, exhilarating and surreal" for a young journalist.

He has since traveled to a total of 25 countries on four continents in a career that has seen its share of danger. He has been robbed at gunpoint by teenagers toting AK-47s in Somalia, slept in a gas mask under threat of chemical attack in the Middle East and felt a sniper's bullet ricochet off his borrowed helmet while driving a Jeep in Sarajevo.

"At this point in my career, I prefer to stay warm, safe and dry most of the time," Hrubesh said. The majority of his work day is now spent in his favorite editing bay at CNN Headquarters. The specially designed work space allows him to stand while editing, something he requested after working on many CNN stories that explained the health dangers of sitting all day.

Stateside, Hrubesh has been on location at numerous news-making events, including the sensational criminal trials of O.J. Simpson, Jodi Arias and Conrad Murray. He has helped CNN cover four presidential elections and countless other political news stories, including, most recently, President Obama's 2014 State of the Union Address.

The "gut-wrenching" stories following 9-11 were by far the most difficult for Hrubesh to work on, he said. "I was at work when the towers were hit and watched in horror like the rest of America. I drove up to New York and witnessed the Pentagon on fire along the way. Less than 24 hours after the towers fell, I reached Ground Zero on foot with my colleagues. I will never forget the destruction. I remember my reporter breaking down and crying in the middle of a live report. I just pulled my baseball cap over my face and cried quietly."

Hrubesh was part of a CNN team that earned an Emmy Award in 1993 for its coverage of the U.S. invasion of Somalia to restore order and help food aid reach millions in the African nation who were starving. The winning programming included live coverage of U.S. Marines landing in Mogadishu, where he was working as a sound technician, producer and editor. In 2005, Hrubesh earned a Peabody Award for his contribution to CNN's coverage of Hurricane Katrina. He worked on dozens of stories in New Orleans and Biloxi, Mississippi, in the aftermath of that devastating storm.

Hrubesh lives in a century-old converted John Deere factory loft in Atlanta, just a few blocks from CNN Headquarters. He loves the city but also enjoys traveling and learning about new places and cultures. His favorite travel companion is his 14-year-old son, Christopher. An avid hiker and cyclist, Hrubesh is passionate about alternative energy and conserving resources. He owns two electric cars and is an active volunteer with Trees Atlanta, spending much of his free time on weekends planting, pruning and watering trees downtown. He says if he didn't work for CNN he would own a business that specialized in helping the environment.

"I am very fortunate to live and work in Atlanta, a great city that is rapidly growing and prospering," Hrubesh said. "And I have been incredibly grateful to CNN for allowing me to do this job that I love for so long.

"Even when I haven't been physically present at the scene of the story, I have been transported to every corner of the world through the amazing images I get to see and work with every day. It could be a kitten being rescued from a tree or a military battle or election that changes the course of history. Either way, I'm there. I get to see it all."