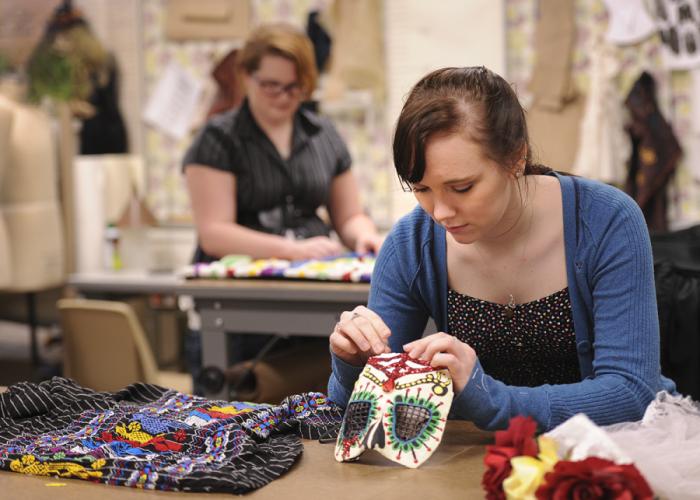 Sloan Frierson, junior theatre major from Kerrville, works on a Day of the Dead mask for the upcoming SFA School of Theatre's production of Federico García Lorca's "Blood Wedding," which opens at 7:30 p.m. Tuesday, Feb. 25, and runs nightly through Saturday, March 1, in W.M. Turner Auditorium on the SFA campus.


NACOGDOCHES, Texas - The meaning of anything can be lost in translation. Rick Jones, professor of theatre at Stephen F. Austin State University, knows that well.

So when he decided to include Federico García Lorca's "Blood Wedding" in this year's School of Theatre's Mainstage Series and the College of Fine Arts' University Series, he knew that selecting the best translation for the Spanish-language play was critical to its success.

"There are the inevitable challenges of doing any work in translation," Jones said. "There are several published translations of this play, and we looked at perhaps eight or nine of them."

Assisted by student dramaturges Virginia Arteaga and Crystal Villarreal, who are fluent in Spanish, and by his assistant director Mary Collie and stage manager Nicole Novit, Jones selected the translation by Brendan Kennelly months before last fall's auditions for "Blood Wedding."

"We examined the translations with three essential criteria: tonal accuracy, literal accuracy and beauty of the language, probably in that order," he said. "We narrowed the list down to three, then to two, and then looked at a handful of key sequences side by side, with Virginia and Crystal looking at the original Spanish, too.

"The version by Brendan Kennelly was the unanimous choice of my staff," Jones said. "Interestingly, Kennelly's adaptations of Greek tragedies - 'Antigone,' 'Medea,' 'The Trojan Women' - were the subjects of the longest chapter in my doctoral dissertation, and I published an interview with him shortly before coming to SFA."

Jones describes the text in "Blood Wedding" as "very rich and therefore sometimes difficult." As such, pulling all the various strands together will be another challenge, he said.

"Because the play moves from something like realism to a blend of symbolism and expressionism, there are a lot of tonal, aural and visual transitions to be negotiated," he said.

Part of Jones' job as the play's director is to coordinate all the different elements of the production - scenery, costumes, lights, sound - into "a coherent and cohesive form."

"This production places significant demands on those respective designers, and also includes live music, both instrumental and vocal, and stage fighting," he said. "That means not only more elements to coordinate for me, but also finding rehearsal time so all of the pieces of the show can be as good as we can make them."

Ross Cleveland, a graduate student in the SFA School of Music, composed music for the play, and Laura Rikard, assistant professor of theatre at SFA, coordinated the stage fighting.

Changing and evolving language, acting styles and environments in "Blood Wedding" will present challenges for even the most seasoned actors, Jones said.

"This show blends prose and verse (and song) in a way few undergraduate actors - even those experienced with Shakespeare - have encountered," he said. "Moreover, the acting style itself, even for individual characters, changes over the course of the play from essentially realistic to quite stylized.

"Some roles are utterly relentless emotionally," he said, "and whereas there are a few light moments, they are shorter in length and less comically broad than we would find in similar plays by Shakespeare or in even Greek tragedy.

"A couple of characters have quite long monologues, and keeping them meaningful, fresh and engaging will be a challenge," Jones said, "although I am absolutely confident in these actors' ability to do so."