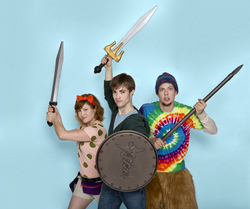 "The Lightning Thief," presented by Theatreworks USA, is among the shows to be presented during the upcoming season of the Children's Performing Arts Series of the SFA College of Fine Arts.

NACOGDOCHES, Texas - The Stephen F. Austin State University College of Fine Arts and the Children's Performing Arts Series have announced the fun and exciting shows that will make up the 2014-2015 CPAS season.

"The Children's Performing Arts Series is committed to bringing the finest in affordable professional companies to East Texas young people and their teachers," said Diane Peterson, manager of the SFA Fine Arts Box Office and director of the series. "In the spotlight for the 2014-2015 season are five exciting national touring productions designed to educate and entertain a variety of age groups."

The new season begins with "Curious George," presented by Theatreworks USA, which is slated for Thursday, Oct. 30, and targets children in pre-kindergarten through third grades. In this play, "All-You-Can-Eat Meatball Day" comes just once a year. George helps his friend, Chef Pisghetti, cook some delicious meatballs and serve them to the hungry crowd. But this year, the crowd has vanished. In despair, Chef Pisghetti vows to cook no more. Determined to help his friend, George goes on a mission to enter the Chef's meatballs in the world-famous Golden Meatball Contest ... in Rome.

"The Monster Who Ate My Peas" comes to SFA Wednesday, Dec. 10, and targets students in pre-kindergarten through third grades. Based on the book written by Danny Schnitzlein and illustrated by Matthew Faulkner, ArtsPower's newest musical tells the funny story of a young boy who doesn't want to eat his peas. When a monster appears underneath his kitchen table, the boy is ready to make a deal with the monster. If the monster eats his peas, the boy will give the monster any of his possessions. When the monster raises the stakes, will the boy face his own fears?

Back by popular demand is the fast-paced musical "Junie B. Jones," presented by Theatreworks USA on Friday, Jan. 30. The outspoken, precocious first grader from Barbara Park's series of books, Junie learns about new friends, new glasses, the annual kickball tournament and other angst-ridden situations as she writes down the story of her life in her "Top-Secret Personal Beeswax Journal." The show targets students in kindergarten through fifth grades.

"The Lightning Thief, presented by Theatreworks USA, is the final show of the season on Tuesday, May 12. Adapted from the book by Rick Riordan, Percy Jackson is about to be kicked out of boarding school ... again. And that's the least of his troubles. Lately, mythological monsters and the gods of Mount Olympus seem to be walking straight out of the pages of Percy's Greek mythology textbook and into his life. And worse, he's angered a few of them. Zeus's master lightning bolt has been stolen, and Percy is the prime suspect.

"CPAS shows are a great way to supplement class curriculums, and our in-depth study guides provide suggestions for pre- and post-performance activities and discussions," Peterson said.