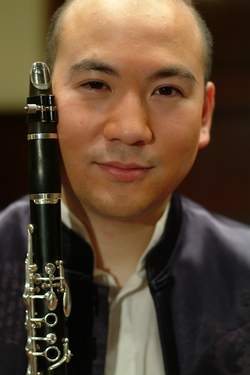 NACOGDOCHES, Texas - The Stephen F. Austin State University College of Fine Arts and School of Music will present Dr. Jun Qian in a guest clarinet recital at 2:30 p.m. Sunday, Oct. 5, in Cole Concert Hall on the SFA campus as part of the Cole Performing Arts Series.

Qian, assistant professor of clarinet at Baylor University, will perform with Baylor piano professor Kae Hosoda-Ayer in a program that features a mix of traditional and contemporary music.

In addition to performing music of contemporary Chinese composers, Qian will also perform staples of the clarinet repertoire, such as "Introduction and Rondo" by Charles-Marie Widor and "Grand Duo Concertant" by Carl Maria von Weber.

"Dr. Qian has recorded the Chinese pieces he'll be performing, and it will be exciting to hear them for the first time on the SFA campus," said Christopher Ayer, professor of clarinet at SFA.

Chinese-born American clarinetist Qian joined the music faculty at Baylor University in 2012 when he was also appointed principal clarinetist of the Waco Symphony. In addition to performing the standard clarinet repertoire, Qian also collects, performs, records and commissions new music for clarinet by Chinese composers.