Concerto/aria winners to perform with Orchestra of the Pines 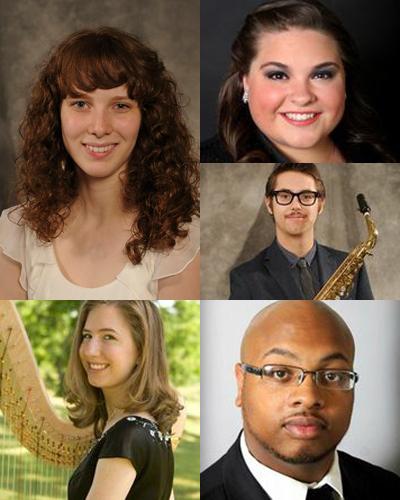 
NACOGDOCHES, Texas - The Stephen F. Austin State University College of Fine Arts and School of Music will present the Orchestra of the Pines performing with the 2014 SFA Concerto/Aria winners in a concert at 7:30 p.m. Monday, March 3, in Cole Concert Hall on the SFA campus.

"The Orchestra of the Pines is pleased to feature outstanding student soloists in our upcoming concert," said Dr. Gene H. Moon, director of orchestras at SFA. "The competition is an annual tradition that highlights outstanding students and reflects the incredible faculty and their pedagogy."

Mayfield, a baritone from Houston, has participated in the SFA A Cappella Choir since 2010 and was chosen to sing with the prestigious Madrigal Singers in 2013. He was also selected as a soloist for SFA's performances of Handel's "Messiah" and Mozart's "Requiem." He has performed in SFA's opera productions of "Street Scene," "Amahl and the Night Visitors" and "La Traviata." He has been named as one of the Top 5 vocalists every year since 2010 at the annual National Association of Teachers of Singing competition, Texoma Region.

Glavanovits is a first-year graduate woodwind student at SFA. He grew up in the suburbs of Chicago where he devoted his early years to studying jazz. He then went on to study saxophone performance at Drake University in Des Moines, Iowa.

Since her arrival at SFA in 2010, Lymer has performed in numerous choral ensembles, including the SFA A Cappella Choir, where she holds the position of mezzo section leader, and the SFA Madrigal Singers. She has performed operatic roles in "Die Fledermaus," "Amahl and the Night Visitors," "Street Scene" and "La Traviata."