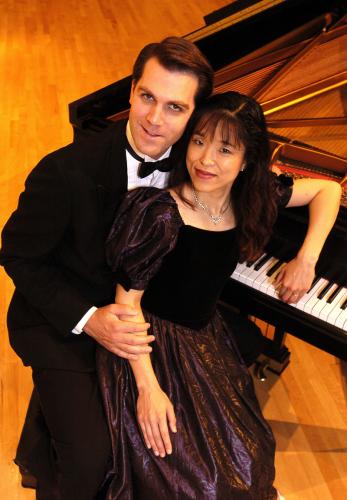 Duo Karudan, featuring Christopher Ayer, professor of clarinet at SFA, and his wife, Kae Hosoda-Ayer, assistant professor of piano at Baylor University, will perform at 2:30 p.m. Sunday, March 30, in Cole Concert Hall on the SFA campus.


NACOGDOCHES, Texas - The Stephen F. Austin State University College of Fine Arts and School of Music will present the Duo Karudan in a concert at 2:30 p.m. Sunday, March 30, in Cole Concert Hall on the SFA campus.

Khachaturian is one of the more well-known Russian composers of the 20th century, along with Shostakovich and Prokofiev, Ayer explained.

"Like his contemporaries, Khachaturian was criticized by the Soviet government for 'modernistic tendencies,'" Ayer said. "His most well-known piece is probably the 'Sabre Dance' from his ballet, 'Gayane,' which has been played all over the world. The Trio has some very lush and beautiful moments and shares some traits with the music of Rimsky-Korsakov."

Resanovic is professor of composition at the University of Akron, Ohio. Much of his music incorporates Serbian folk influences, and this trio is no exception with driving rhythms throughout, featuring many meter changes, according to Ayer.

Reinecke was a German Romantic composer who lived into the 20th century. He was a well-known pianist and pedagogue in the latter half of the 19th century and was especially known as an interpreter of Mozart.

Duo Karudan has performed throughout the United States, Canada and Japan, and performed at the International Clarinet Association World Conferences in Tokyo, Austin and Atlanta.

Tickets are $8 for adults, $6 for seniors and $3 for students and youth. For tickets or more information, call the SFA Fine Arts Box Office at (936) 468-6407 or visit www.finearts.sfasu.edu. Cole Concert Hall is located in the Wright Music Building, 2210 Alumni Drive.