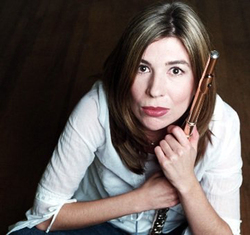 Gariazzo is an instructional assistant professor at Texas A&M University where she teaches flute, music in world culture, musicianship and small ensemble classes. Her performance at SFA is a solo recital featuring compositions for alto and bass flute. The selection of works illustrates composers' increased interest at the turn of the century in exploring the expressive potential of the lower flutes, she said.

"These works draw on the sensual and robust timbral characteristics of low flutes, pairing color with revealing technical virtuosity," Gariazzo said. "It is a journey of timbres and musical conceptions that makes us wonder about the real boundaries of sound, expression and music itself."

The program features Marcelo Toledo's "Lo fugáz perpetuo" and "Polifonía Concreta" and Daneil Kessner's "Tous les matins…," among others. "Lo fugáz perpetuo" was commissioned by Gariazzo and premiered earlier this year at the National Flute Association Convention in Chicago. Of the piece, Gariazzo said, "The mysterious sounds of the alto flute become a channel which is always present, yet unavailable or fleeting at times."

Toledo composed "Polifonía Concreta" and dedicated it to Gariazzo in 2008. It is the result of a long-standing collaboration between composer and performer, Gariazzo explained. "Written in an extended musical language, this virtuosic piece takes the expressive and technical capabilities of the instrument beyond its conventional boundaries," she said.

Gariazzo has been a recipient of several awards and distinctions in solo and chamber music categories, including the Robert Wilson Award for Outstanding Woodwind Performance at Yale. Her research focuses on new music by Latin American composers, and she has served as a guest artist and speaker on the subject at prominent venues in Latin and North America.