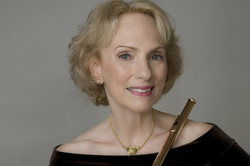 Join flutist Eugenia Zukerman and Friends for a night of enchanting chamber music at 7:30 p.m. Thursday, Sept. 11, in W.M. Turner Auditorium on the SFA campus in the opening performance of the College of Fine Arts' 2014-2015 University Series, "Connect."

Often described as a Renaissance woman, Zukerman not only maintains an international concert calendar with more than 30 performances annually, her multi-faceted career also includes distinguished work as an arts administrator, author, educator, Internet entrepreneur and journalist, according to Goodall.

"She has performed as soloist with many of the world's finest orchestras," he said.

Recognized with an Emmy nomination as an important broadcast journalist, Zukerman interviewed and created more than 300 portraits as an arts correspondent for CBS Sunday Morning. The author of the New York Public Library's Award-winning non-fiction book "In My Mother's Closet," and also "Coping with Prednisone" (which she co-authored with her sister, Dr. Julie R. Ingelfinger), she has enjoyed success in the humanities as well as the arts. She is an adjunct faculty member at New York University's Steinhardt School of Music and a frequent guest teacher at conservatories nationwide.

Moldovan-American pianist Strezeva is a founding member of the Manhattan Piano Trio. She is the daughter of renowned soprano Svetlana Strezeva, and the two have given recitals across the U.S., Europe and Asia.

Cellist Shao, a Houston native, has performed with orchestras across the nation and is a frequent guest at leading music festivals. She is on the faculty of Vassar College and the Bard Conservatory of Music.

Violinist Kim, winner of the 2009 Concert Artists Guild International Competition, has appeared in major venues across North America, Europe and Asia and performed at the U.N. Headquarters in both Geneva and New York.

Prior to the concert, there will be a 7 p.m. informative talk about the artists and their music to be presented by Dr. Christina Guenther, associate professor of flute at SFA, in Griffith Gallery located across the hall from Turner Auditorium. The audience is invited back to the gallery for a post-performance reception to meet the performers and to honor the event's corporate sponsor, Cataract, Glaucoma & Retina Consultants of East Texas/Benchmark Optical.