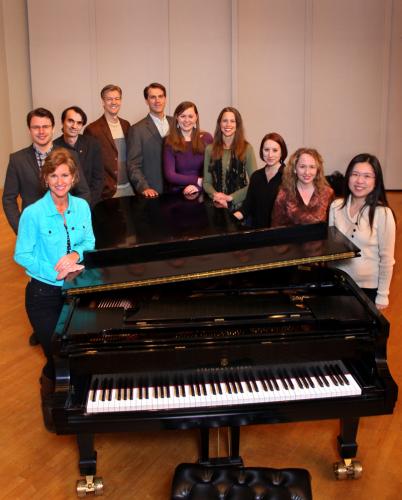 Each year, the annual "Fung and Friends" concert has a theme, according to Geneva Fung, School of Music staff accompanist in piano. Last year's music was about animals.

"The title of the concert this year is '3's Company,'" Fung said, "and we are going to perform piano trios that are written for different instrumental, vocal and dance combinations."

Among the pieces performed will be the familiar "Swan" movement from "The Carnival of the Animals" by Camillie Saint-Saëns, which was performed during last year's Fung and Friends concert, but will be a different version this year, she said.

Also on the program will be "Come Down Heavy!" by Evan Chambers, which is taken from a line in the folksong "Drill Ye Tarriers," upon which the last movement of the piece is based, Fung said.

"The composer grew up listening to his parents singing folksongs," she said, "This piece was inspired by memories of his father beating on his guitar, belting out John Henry, and the quiet sadness in his mother's voice as she sang him to sleep. There are four movements in the piece. They are not 'arrangements' or folksongs, but rather settings or treatments of them; while the tunes are present, they are often transformed, extended, and even abandoned."

Also featured will be Sergei Rachmaninoff's Trio élégiaque, a one-movement piece in classical form unlike other piano trios that consist of three or four movements.

"Despite his youth, Rachmaninoff shows in the virtuoso piano part his ability to cover a wide spectrum of sound colors," Fung said. "This trio has a distinctive connection to Tchaikovsky's Trio in A minor, both in the unusual, expanded first movement, and in the funeral march as a conclusion."

Tickets are $8 for adults, $6 for seniors and $3 for students. For tickets or more information, visit www.finearts.sfasu.edu or call the SFA Fine Arts Box Office at (936) 468-6407. The recital will be broadcast live through music.sfasu.edu/stream. This performance is part of the Cole Performing Arts Series.