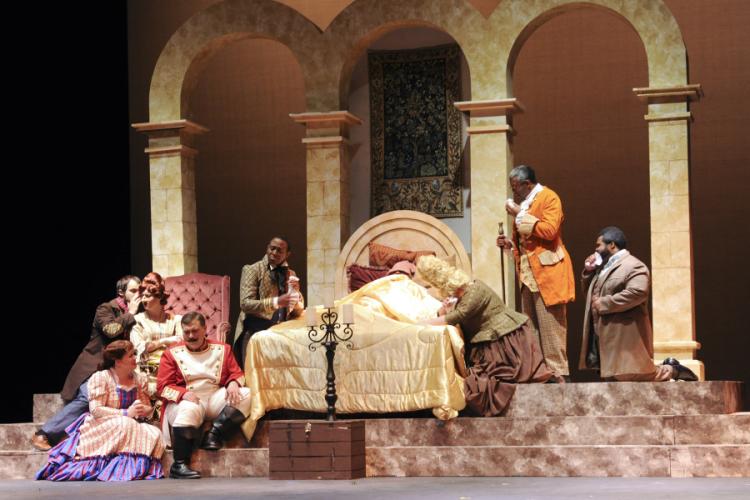 
NACOGDOCHES, Texas -When the Stephen F. Austin State University College of Fine Arts and Schools of Music and Theatre present "Gianni Schicchi" and "Sister Angelica," the directors and student performers will demonstrate their mastery in juggling the challenges of a large-scale opera production.

The main challenge lies in that this year's SFA opera production, which is actually two one-act operas (sung in English) by Giacomo Puccini, has four large casts, according to Dr. Deborah Dalton, associate professor of voice at SFA and the opera's director.

As such, the performers must be prepared musically and dramatically in the same time frame that they normally prepare only two casts - one performing the Thursday and Saturday shows and one taking the stage for the Friday night performance. And with two one-act operas, the usual challenges double.

"Large multiple casts also put a strain on the budget and on our wonderful costume shop," Dalton said.

SFA Professor of Theatre Angela Bacarisse, shop supervisor Barbara Blackwell and their students must costume more than 50 singers, and they do it miraculously, Dalton said.

"After measuring each singer, costumes are either rented or pulled from stock," she explained. "Then, all 50-plus singers must be fitted and appropriate alterations made. Any rental costumes arrive three-to-four days before our first dress rehearsal. That means the costume shop goes into overdrive, working long hours to have everything ready."

Perfecting the music of the two operas is equally difficult, as Dalton describes Puccini's music as "gorgeous, complex and vocally challenging, especially for the leads."

"The arias (featured solos) test the singers' vocal technique, artistry and stamina," she said. "The leads truly get a workout."

"Sister Angelica" has 27 women onstage for the first half. The singers must remember their blocking for each section and sing their short conversational interjections as cued, she explained.

"This is challenging," Dalton said. "It is so much easier to sing a complete aria or chorus than to wait for your turn to sing 'Not I!' on time!"

"Gianni Schicchi" has many challenges as well, she said. There is no chorus, but the eight relatives are onstage for the entire opera.

"The music is complex and full of tricky rhythms that cause the ear to perceive a false downbeat," she said. "This score is also full of conversational singing. If one singer misses a musical cue, it can throw off singers with the following cue. Fortunately, our students have worked very hard and will have Maestro Gene Moon (director of orchestras at SFA) to guide them in the pit."

"Sister Angelica" offers a glimpse into the lives of cloistered nuns. One in particular, Angelica, has been there for seven years. Her noble family sent her away after she brought dishonor to their name by having a child out of wedlock. After receiving no word at all from her family during this time, Angelica is surprised by a visit from her aunt, the Princess. The visit doesn't go well. Angelica begs for news of her son. What does he look like? The Princess informs Angelica that the child died two years ago. Angelica, distraught with grief, decides that the only way she will be with her son is in heaven. She drinks poison but remembers suicide is a mortal sin. Angelica prays for the Virgin Mary to forgive her. As she dies, Angelica sees the Virgin bringing the child to his mother. At last, they are reunited.

In "Gianni Schicchi," the relatives of old Buoso Donati gather at his deathbed. Each one is hoping Buoso has bequeathed them a large part of his sizable fortune, but rumor has it that Buoso gave everything to a local monastery. Young Rinuccio brings in Gianni Schicchi, known for his cleverness and trickery, to help with a plan to forge a new will. Rinuccio loves Gianni's daughter, Lauretta. Gianni instructs them to fetch the lawyer, hide the body and he will dictate a new will disguised as old Buoso. After assuring each relative that they will get what they deserve, Gianni proceeds to give the most valuable possessions to himself. The relatives are helpless. If they expose Gianni, they will expose themselves as forgers. The penalty for forgery is amputation of the fingers and exile forever.

Prior to Thursday's opening night performance, there will be a 7 p.m. informative talk about the opera in Griffith Gallery located across the hall from Turner Auditorium. The audience is invited back to the gallery for a post-performance reception to meet the performers and to honor the event's corporate sponsor, Point A Media.