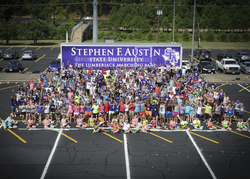 NACOGDOCHES, Texas - Members of the Stephen F. Austin State University Lumberjack Marching Band arriving for the start of practice this week were welcomed by a spanking new trailer emblazoned with the university's logo and musical notes from the school song.

In the last 10 years, the band has grown from 177 members to an estimated 300 this fall, and the group's old truck was no longer large enough to hold all the equipment and uniforms the band needs for its spirited performances. The new trailer can store everything the band needs and will make an impressive statement for SFA when it hits the road for football games, parades and other special events.

"I'm very thankful that our president Dr. (Baker) Pattillo and the Board of Regents saw our need and provided us with our new trailer," said Dr. David Campo, the band's director. In addition, the commuter parking lot where the band practices underwent a much-needed resurfacing this summer.

"The original layout of the field was done by students, and while their effort and dedication are greatly appreciated, they weren't equipped to do the job to the exacting standards necessary," Campo said. "With high profile events such as the London New Year's Day and Macy's Thanksgiving parades, we are now even better prepared to represent our great university nationally and internationally. It's a great time for The Lumberjack Marching Band!"