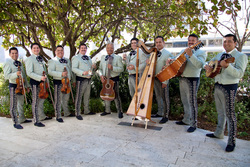 For more than 50 years, Los Camperos de Nati Cano has featured the finest mariachi musicians from Mexico and the United States.

"The ensemble is noted for complex musical arrangements that highlight the individual skills and voices of the players," said Dr. John W. Goodall, associate dean of the SFA College of Fine Arts. "This festive program is a great way to kick off the holiday season and should put everyone in the Christmas spirit."

Mariachi Los Camperos was founded in 1960 by mariachi "giant" Natividad "Nati" Cano. His passing in October 2014 was mourned nationwide by performers, students and lovers of mariachi. This concert is dedicated to him.

In the words of Jesus "Chuy" Guzman, artistic director of Los Camperos, "... el mundo del mariachi ha perdido un gigante (the mariachi world has lost a giant)." A traditionalist and a visionary, Cano played an integral role in the development of mariachi music in North America by training and mentoring new generations of mariachi musicians, by expanding the repertoire, and by bringing mariachi performance out of the traditional venue - the cantina - and into the concert hall.

Mariachi Los Camperos was one of four mariachi bands that collaborated on Linda Ronstadt's album, "Canciones de Mi Padre (Songs of my Father)." In 1988-89, the group worked on the promotion of the album, including national television appearances on programs such as "The Tonight Show" with Johnny Carson and the Grammy Awards Show. They also appear on Ronstadt's "Mas Canciones (More Songs)."

The ensemble has recorded nine albums. In 2006, the album "Llegaron Los Camperos" was nominated for a Grammy in the category of Best Mexican/Mexican-American Album. In 2008, the group released its third CD with Smithsonian Folkways, entitled "Amor, Dolor y Lágrima," that won the 2009 Grammy for Best Regional Mexican Album.

Prior to the concert, J.D. Salas, assistant professor of tuba and euphonium studies at SFA, will present a 7 p.m. informative talk in Griffith Gallery about the artists and their music. The gallery is located across the hall from Turner Auditorium. The audience is invited back to the gallery for a post-performance reception to meet the performers and to honor the event's corporate sponsor, Nacogdoches Medical Center.