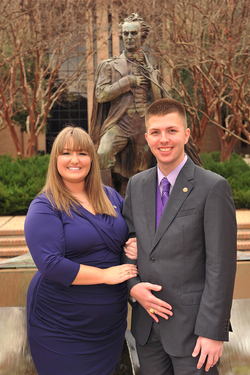 Chad Huckaby of Nacogdoches and Sabrina Wallace of Deer Park have been chosen for the 2015 Mr. and Miss SFA award. The students will be honored during halftime of the Stephen F. Austin State University men's basketball game against Houston Baptist University beginning at 6 p.m. February 7.

The Mr. SFA Award was established in honor of the late Stan McKewen, a 1934 SFA graduate. The Arnodean Covin Miss SFA Award honors the SFA alumna who was named Miss SFA in 1940, 1941 and 1942.

Huckaby, recipient of the Stan McKewen Mr. SFA Award, is a senior mathematics major. A 2011 graduate of Martinsville High School, he is the son of Tim and Monaca Huckaby of Nacogdoches.

Huckaby is president of the SFA Circle of Omicron Delta Kappa, the national leadership honor society, and serves on ODK's national membership committee and the inaugural national Student Advisory Board.

In addition to serving as a supplemental instructor in SFA's Academic Assistance and Resource Center, Huckaby has participated in the SFA School of Honors and the SFA Litterbug program. Huckaby serves as pianist for the Martinsville Baptist Church and leads worship services at a local nursing home. He has received the Citizens 1st Bank NOBLE Scholarship since 2011.

A recipient of the Who's Who Among Students in America Universities and Colleges award, Huckaby plans to enroll in a master's degree program at SFA after graduation.

"Mr. SFA should be hardworking and intelligent," said Dr. Lee W. Payne, associate professor of political science. "Chad fulfills both of these requirements very well. I know from many conversations with Chad that he is a diehard Lumberjack who bleeds purple."

Wallace, a 2011 graduate of Deer Park High School, is a senior health science major and recipient of the Arnodean Covin Miss SFA Award. She is the daughter of Paulette Baker and Robert Wallace of Deer Park.

Through her service as an involvement adviser and as executive director of the Involvement Center, Wallace has assisted students seeking to become involved in SFA organizations. She served as secretary and president of the Traditions Council, as a Jack Camp counselor to incoming first-year students, and as an orientation leader. She received the 2011 Traditions Council Female Member of the Year award and the SFA Way Award in 2014 for exemplifying and living SFA's honor code during every aspect of her daily life.

"We encourage our student leaders to leave a legacy not a resume during their time at SFA, and Sabrina has truly strived to do so," said Lacey Claver, assistant director of student engagement.

The Mr. and Miss SFA title is an award presented each year by the SFA Alumni Association to exemplary students who well represent and promote SFA. Recipients are selected based on their scholarship, participation and leadership in academic and co-curricular activities, citizenship and service and loyalty to the university. Selections are made by a committee of faculty, staff, community leaders and alumni.