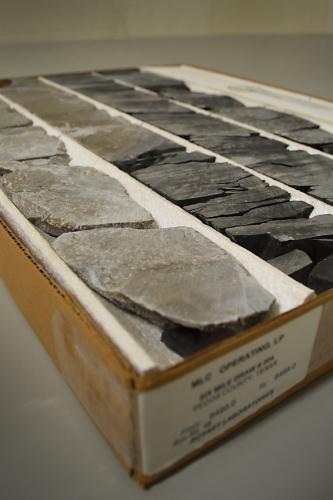 The East Texas Core Repository contains geologic samples that are valuable for research. SFA students study the samples to learn about the geological history of the land from which the donated materials were extracted. The scientific terms for this type of research are stratigraphy and sedimentology.


Nacogdoches, TEXAS - A new addition to Stephen F. Austin State University's Department of Geology is fueling opportunities for geology student and faculty research and strengthening the university's connections to the petroleum industry.

The East Texas Core Repository serves as a final resting place for valuable geologic samples originally obtained through prospecting and drilling activity that have been donated to SFA for research purposes. The repository houses cores, slabs and plugs that consist of layered earth and rock. Students and other researchers can study the samples to learn about the geological history of the land from which they were extracted. The scientific terms for this type of research are stratigraphy and sedimentology.

Dr. Kevin Stafford, assistant professor in the Department of Geology in SFA's College of Sciences and Mathematics, said the samples will be especially beneficial to graduate students conducting thesis research on the composition of rocks being studied in East Texas fields.

"When drilling a new well, you want to understand the geology of the land before investing in it," Stafford said. "Cores are valuable. They show what the subsurface consists of."

Stafford credited several SFA alumni working in the petroleum industry with helping make the new core repository a reality. The repository received its first batch of core samples in October 2013 from Trek Oil and Gas in Houston, and the university is in contact with several other companies interested in making additional donations. The facility currently houses approximately 12,000 pounds of samples. Most of the donated core samples are about three feet long and weigh approximately 50 pounds each.

The majority of the samples that have been donated were collected from Crockett and Pecos counties, while additional samples from East Texas are in the process of being transferred to the ETCR. Most of the cores are cylindrical in shape, while slabs are cut into flat samples. The plugs are much smaller sections that are drilled out of the cores and stored in glass jars at the repository.

The ETCR is now one of four university-run repositories in the state and the only one located in East Texas, providing a convenient place for area industry professionals to donate and access the materials. The University of Texas operates repositories in Midland, Austin and Houston.

Dr. Michael Janusa, professor and chair of SFA's Department of Chemistry and Biochemistry and director of the Discovery and Research Center where the ETCR is housed, said he has high hopes for the university's new repository.

In addition to research opportunities, the repository is expected to serve as a link between students within the department and career opportunities in the industry. Stafford said he hopes the facility will help boost enrollment numbers in the department, as well as post-graduation hiring statistics.

"My main goal for the repository is two-fold," Stafford said. "I hope and believe it will strengthen the geology department's relationship with the petroleum industry and produce students who are experts in the East Texas petroleum industry."

While opportunities are free for students, the facility will charge minimal fees for public research use and assess archival fees when additional cores are donated.

Jade Norris, manager of the Discovery and Research Center, currently oversees the daily activities of the facility and said "the potential for future growth is very exciting."

"I look forward to seeing this project continue to flourish as good things are on the horizon for both the repository and the Discovery and Research Center," Stafford added.