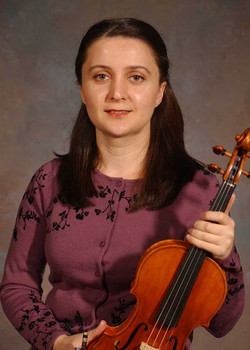 Gogichashvili, associate professor of violin at Baylor University, is a soloist, chamber musician and teacher, and she is well known for her performances both in the United States and abroad. Joining her in concert is pianist Kae Hosoda-Ayer, assistant professor of piano at Baylor University, who also enjoys a full career as a performer and teacher and has performed worldwide as a collaborative artist.

"The program consists of two sonatas for violin and piano, which are both great pieces and important contributions to this genre," said Jennifer Dalmas, associate professor of violin at SFA.

The first half of the program will feature the "Kreutzer Sonata" by Ludwig van Beethoven.

"The ninth of Beethoven's 10 sonatas for violin and piano, this is the most grand and impressive, with brilliant and equally demanding writing for both performers," Dalmas said.

The second half of the program will feature Sergei Prokofiev's Sonata No. 2 in D major.

"Originally for flute, this sonata is known as one of the lightest and most lyrical of his compositions," Dalmas said. "Shortly after its publication, Prokofiev transcribed the work for violin, and it was first performed by the great violinist David Oistrach in 1944."

Gogichashvili will also teach a master class that is free and open to the public at 1 p.m. Friday, Oct. 10, in Music Recital Hall.