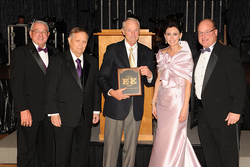 Philanthropic contributors to the university are recognized by induction into one of three societies: the Fredonia Society, the Thomas J. Rusk Society, and the Stephen F. Austin Society. The cumulative levels of giving range from $100,000 to $1 million or more.

Elliott Electric was started in 1972 by Bill Elliott and his late wife, Micky, and Bill remains as involved in the company as he was on the first day of business. In addition to its support of SFA's College of Fine Arts, Elliott Electric has shown its appreciation for the Nacogdoches community through its work with the Arthur Temple College of Forestry and Agriculture.

After Micky's death, Bill honored his wife with a bridge that crosses Lanana Creek into the Mize Azalea Garden on the SFA campus.

"Bill knows how to build bridges that connect plants and people. He's done that at SFA and in our community," said Dr. David Creech, director of the SFA Gardens.

Nacogdoches Medical Center
Nacogdoches Medical Center, a licensed 153-bed acute care facility, opened in 1975 and was recognized in 2013 as having one of the best patient satisfaction ratings out of the 78 hospitals that make up Tenet Healthcare. Medical Center strives to be a great community partner, as well, with members of its leadership team serving on 18 community boards. The hospital also is loyal to the university's mission, providing support for SFA athletics, the College of Fine Arts, the College of Sciences and Mathematics, and the Archie McDonald Speaker Series.

Nacogdoches Memorial Hospital
Memorial Hospital has been a vital part of the community for more than 85 years, growing along with East Texas and expanding services to focus on the unique needs of each individual member of the family. Memorial Hospital's commitment to making East Texas a great place has included support for SFA athletics, the College of Fine Arts, the Richard and Lucille DeWitt School of Nursing and the Veterans Resource Center.

Dr. Kim Childs, dean of the SFA College of Sciences and Mathematics, said the university is fortunate to have Nacogdoches Medical Center and Memorial Hospital as partners.

Within the SFA College of Sciences and Mathematics, our pre-health professional students and nursing majors benefit from the high quality training and mentoring they receive from professionals within the local hospitals. SFA students and faculty benefit from the latest medical technology, from hands-on training to receiving quality medical care. We are proud to partner with both hospitals to produce leaders of tomorrow who are prepared to embrace the challenges in health care."

Nelson Rusche
Nelson Rusche was born in 1924 and was awarded the Purple Heart for honorably serving his country as an Army sergeant during World War II. He earned a Bachelor of Business Administration from SFA in 1979.

Rusche founded A.N. Rusche Distributing Company and Mister Car Wash and was a member of the Petroleum Club, the Houston Club, Houston Country Club, and the Texas Food and Fuel Association. Rusche honored SFA by endowing the Nelson Rusche College of Business in 2002. He passed away in 2013.

Faculty Awards
The faculty awards presented during the Gala recognize innovation and excellence in teaching and research. Dr. Matthew McBroom, associate professor of forest hydrology, is the recipient of the 2014 Faculty Achievement Award for Teaching. Dr. Kefa Onchoke, associate professor of chemistry and biochemistry, earned the Faculty Achievement Award for Research.

The annual event included a cocktail reception, a candlelight dinner and a dance with entertainment provided by In10City, a group of accomplished musicians from Dallas performing hits including rock, jazz, country and hip-hop. 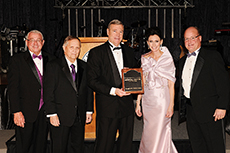 Nacogdoches Medical Center was inducted into the Fredonia Society in recognition of contributions made to Stephen F. Austin State University at the 26th annual SFA Gala. Pictured are, from left, Steve McCarty, chair of the SFA Board of Regents; Dr. Baker Pattillo, SFA president; Gary Stokes, Nacogdoches Medical Center CEO; Jill Still, vice president for university advancement; and Jimmy Mize, chair of the SFASU Foundation Board. 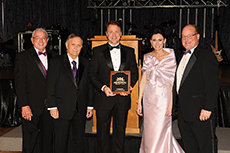 Nacogdoches Memorial Hospital was inducted into the Fredonia Society in recognition of contributions made to Stephen F. Austin State University. Pictured are, from left, Steve McCarty, chair of the SFA Board of Regents; Dr. Baker Pattillo, SFA president; Scott Street, CEO of Nacogdoches Memorial Hospital; Jill Still, vice president for university advancement; and Jimmy Mize, chair of the SFASU Foundation Board.