Parr piano recital to feature retrospective of past works 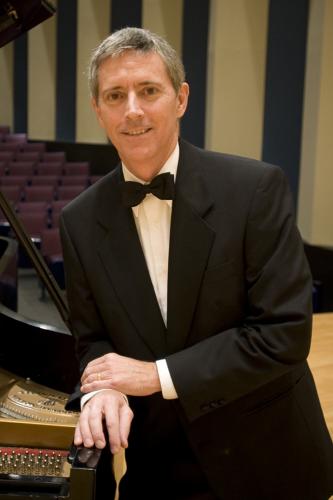 
NACOGDOCHES, Texas - The Stephen F. Austin State University College of Fine Arts and School of Music will present Dr. Andrew Parr, professor of piano, in a faculty recital performing "A Retrospective, Past and Present" at 7:30 p.m. Tuesday, Jan. 28, in Cole Concert Hall on the SFA campus.

"This recital is a new look at works learned over three decades ago, but were either never performed or not performed since that time," Parr said. "It has been an interesting process to revisit these 'old friends' and reconnect with the past."

Featured major works on the program are the relatively unfamiliar Theme and Variations, Op. 73 by Gabriel Fauré and the Sonata No. 3 in B Minor, Op. 58 by Frédéric Chopin.

"The Fauré Variations were composed in 1910 for a piano competition at the Paris Conservatory and have long been considered by the French as a masterpiece of the variation form," Parr said. "The Chopin sonata was written toward the end of the composer's life, and it embodies the culmination of his musical language, from the nocturne-like slow movement to the virtuosic finale."

Other works on the program are by Wolfgang Amadeus Mozart, Franz Liszt and American composer Charles T. Griffes.

Parr has been on the faculty at SFA since 1983. He earned doctoral and master's degrees from Yale University and additional degrees from Kent State University. He studied at the Hochschule für Musik und Darstellende Kunst in Vienna, Austria, as the recipient of a Fulbright scholarship, and also in Paris, France.

Parr performs regularly as a soloist and chamber pianist. Among his concerto highlights were with the Fort Worth Chamber Orchestra, the San Antonio Symphony and the Belgrade Philharmonic. For 10 years, he performed with the Sylvan Chamber Ensemble, and he also plays in a duo piano team with his wife, Linda Parr. In May, 2009 he presented a lecture at the World Piano Conference, sponsored by the European Piano Teachers Association, held in Novi Sad, Serbia, and in June, 2013 he was among the faculty of the Vienna Piano Academy in Vienna, Austria.

Parr's performance is a feature of the Cole Performing Arts Series. Tickets are $8 for adults, $6 for seniors and $3 for students. For tickets or more information, visit www.finearts.sfasu.edu or call the SFA Fine Arts Box Office at (936) 468-6407.