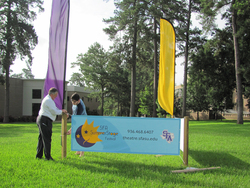 Stephen Davis, junior theatre major from Baytown, assists Sam Smith, director of student services at SFA, in putting up banners and flags to promote the SFA SummerStage Festival, which runs June 28 through July 18.

NACOGDOCHES, Texas - The lineup of summer shows by the Stephen F. Austin State University School of Theatre not only has a new name, there are also new pre-show activities for audiences designed to add to the excitement of the all-new SummerStage Festival.

"We want to invite everyone in the community to this fun and casual festival," Shattuck said. "Feel free to drop in for the ice cream and free live music outside, then come on inside for the play if it suits your fancy."

Ice cream novelties and soft drinks will be on sale starting one hour before all evening and weekend shows, according to Sam Smith, director of student services at SFA, who brings his own experience in summer theatre.

"I served as the producer for couple of summer theater productions in previous college towns," Smith said. "These were always great fun for the audiences and the student players. These shows are great opportunities for birthdays, class reunions, church outings and family vacations."

Refreshments will not be available before weekday matinees.

The free pre-show entertainment will be outside the main entrance to Griffith Fine Arts Building (on the lawn between Cole Concert Hall and North Street) and begins one hour before each evening and weekend performance of the SFA SummerStage Festival and one half-hour before each weekday matinee.

To be sure the SummerStage shows are accessible to the entire community, the School of Theatre started experimenting last year with "Pay-What-You-Can" performances. At these special shows, those who are able to pay full price for a ticket are asked to support the program by doing so, but those who can only pay a few dollars or even a dollar or less are equally welcome, Shattuck said.

For the second year, the Nacogdoches Walmart has agreed to underwrite these "Pay-What-You-Can" shows, which include the June 28 performance of "To Kill A Mockingbird" and the 2 p.m. July 5 performance of "Alice In Wonderland."
"These beloved stories are for everyone, and Walmart is making it possible for us to welcome the whole community, regardless of ability to pay," Shattuck said. "We are grateful that our friends at Walmart agree that no kid, no family, no one living on a fixed income should be excluded from the SummerStage Festival."