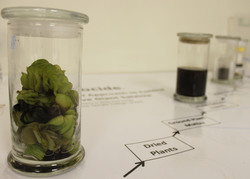 Giant salvinia is one of the South's most damaging aquatic invasive species, forming dense mats of vegetation that severely impairs water quality and destroys wildlife habitat. The application of endocide, patent pending, holds promise in controlling salvinia, and research regarding its effectiveness in controlling other invasive species is underway.

NACOGDOCHES, Texas - More than 80 natural resource and invasive species specialists met at the Red River Waterway Commission's aquatic research center in Lena, Louisiana, in August to observe the results of field research regarding a promising solution to giant salvinia (Salvinia molesta), one of the South's most damaging invasive species.

Researchers at the National Center for Pharmaceutical Crops located at Stephen F. Austin State University's Arthur Temple College of Forestry and Agriculture have developed a novel concept for addressing invasive species by utilizing compounds present in the organism. Endogenus biocide, or endocide, refers to an agent derived from a source that does not cause apparent poison in normal growth of the producing plant, but, when exposed, has biocidal effects in that species.

After three years of extensive investigations in lab and field trials, the researchers determined giant salvinia extracts and one of its fractions from giant salvinia successfully controlled the invasive plant in various stages of growth without negatively affecting surrounding flora and fauna. The invitation-only event in Louisiana provided natural resource managers and government representatives with an overview of the research, as well as a firsthand look at the extraction process and results.

"What brings people together is a common enemy," said Dr. Steve Bullard, dean of the Arthur Temple College of Forestry and Agriculture. "And invasive species are that enemy."

Giant salvinia was brought to the U.S. from Brazil in the 1980s as an ornamental aquatic fern. Since its introduction to native waterways, the plant has invaded lake and river systems in the southeastern United States, California, Arizona and Hawaii. Salvinia forms dense mats of vegetation, which negatively affects water quality, destroys wildlife habitat and limits recreation. In favorable conditions, the plant can double its biomass in two to three days, making its control a struggle for natural resource agencies.

"We treat anywhere between 60,000 and 90,000 acres a year," said Alex Perret, aquatic plant control coordinator for the Louisiana Department of Wildlife and Fisheries. "We're always treating wide open water bodies with giant mats of this stuff."

According to Biologist Supervisor Sean Kinney with the Louisiana Department of Wildlife and Fisheries, the agency currently uses a combination of herbicide and salvinia weevils to stem the invasive plant's spread. However, Kinney notes, herbicide is very limiting due to its negative effects on surrounding flora.

Collaboration was a key theme throughout the meeting, with researchers and participants discussing future steps for larger scale studies of endocide application. The partnership between the Red River Waterway Commission and the National Center for Pharmaceutical Crops began after Bullard heard a Red River Radio interview with Executive Director Ken Guidry in which he discussed the commission's research of weevils as a method of bio control. Bullard said he immediately contacted Guidry in hopes of collaborating to address the damaging invasive plant.

"It's a great opportunity for us all," said Guidry. "We get more done when we're working in the same direction."

In small-scale studies, endocide has proven to have broader applications for species-specific control of other invasive species. Bullard says in the long range, experts envision a coordinated effort between universities and agencies in which endocide usage is thoroughly researched and tested.

"One way in which we envision doing that with the help of our congressional representatives and our senators is having a meeting in Washington, D.C., of agencies, funders and researchers," Bullard explained. "Because in the world of science, it's all about peer replication, and we know we need to take that step."

Agencies interested in collaborating or learning more about the research may contact the National Center for Pharmaceutical Crops at (936) 468-2071. 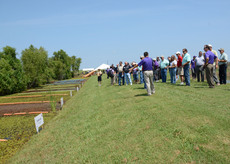 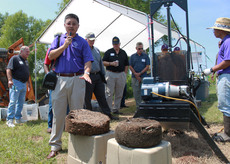