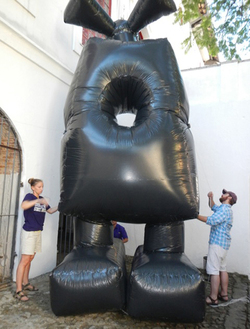 Lauren Selden, associate professor of art metals for the SFA School of Art, and Zac Selden install an inflatable sculpture for the Bienal da Bahai this past summer in Brazil.

NACOGDOCHES, Texas - A university research initiative this past summer took an art professor at Stephen F. Austin State University to Salvador, Brazil. In addition to fulfilling multiple research goals, the exchange gave Lauren McAdams Selden, the associate professor of art metals for the SFA School of Art, a more universal view of the world.

Selden was part of a group of 13 professors and six graduate students who participated in a program aimed at creating and fostering relationships in Salvado Da Bahia, Brazil. Working with de Araújo Santos, professor of ceramics at Escola de Belas Artes at the Universidade Federal da Bahia, and with the assistance of SFA graduate student/translator Jaime Heredia, Selden gave a demonstration to the ceramic students about how to create mokume gane, a Japanese metalworking technique, using two different clay bodies and natural pigments.

A highlight of the trip was Selden's participation in the third Bienal da Bahia in an educational event (Ateliê Livre das Oficinas do MAM, or open workshop of the Museum of Modern Art, a project that welcomes artists who wish to work on their projects or develop their artistic processes in the museum's workshop space) working directly with the educational department coordinated by Eliane Moniz de Aragão Simões and with Felix White Toro, coordinator of the museum's workshops.

"The Bienal was especially important because it was the first time that the region has had the event since 1968," Selden said.

In 1966, the historic first Bienal strived to decentralize art in Brazil and bring together artists from different parts of the country to highlight the important work being done in Bahia and the northeast. In 1968, as a result of the military coup d´état, the second Bienal was interrupted, works were confiscated and artists were arrested.

This year, the launch of the third Bienal shared faith in ideas and dialogue and an impressive 100-day schedule of art, education and experiential activities, according to Selden.

"It was an honor to be able to illustrate a particular art-making process by building a 5 x 2 x 2 meter inflatable sculpture named Zé as part of the discussion of 'É Tudo Nordeste?'" Selden said. "Considering the strong history of the Bienal da Bahia and the persistence of a region longing to express itself artistically, the representative plastic inflatable only seemed fitting to illustrate potential energy, success, failure and a constant human will to proceed, to fight and to believe.

"I hope that this plastic sculpture, with the use of simple every day materials, allowed for an additional experience in the educational programming that the museum offers," she said. "I truly hope that I can participate in future events, educational opportunities and creative presentations at the Museum of Modern Art of Bahia."

Brazil and its people deeply impacted Selden, and her future works will reflect the effects the country had on her life and her art.

"In previous works, I have focused on ideas of potential energy, refugee experiences, adaptations for survival, and the power of contemporary female figures," she said. "All of these themes are globally applicable. I plan to create multiple works of art directly inspired by my experience in Brazil."

This work will be on display in February at Northwestern State University in Natchitoches, La. Selden is also negotiating a second exhibition in March at Texas A&M University in College Station.

"After the exhibitions in the United States, I hope to have an exhibition in Brazil," she said. "Brazil has changed my view as an artist, and I want to show the people in these regions another perspective in the universal language of art."

Selden believes continuing to practice speaking, reading and writing in the Portuguese language will give her new opportunities.

"The interactions that I have had with the students and makers in Brazil will continue to impact my work and have a direct effect on the students that I teach in the United States," she said. "It is a valuable asset in the field of fine arts to have a more universal view of the world, and I know that this experience will allow me to be a better artist and teacher."