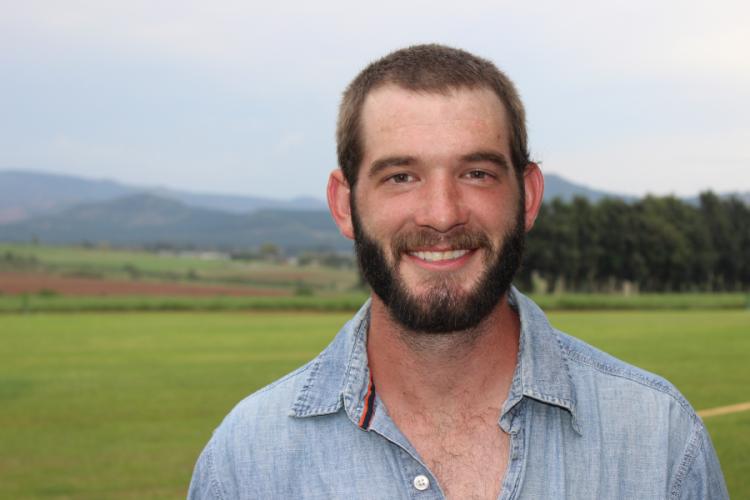 
SFA environmental science graduate Marshal White '13 has moved to Swaziland, a small country in Southern Africa, where he is helping lead the extensive sustainability efforts of African Christian College.

White, a graduate of Lufkin High School, first attended Harding University in Searcy, Ark. There, he was working toward a degree in biology, but he "got tired of the microscope" and wanted to do something different. His father arranged a meeting between White and someone he knows at the college, and ACC took him on as an intern from August to December of 2010.

When the internship ended, White wanted to get involved in environmental policies, but realized he needed an education first. He searched for a program to meet his needs, and eventually landed in the Division of Environmental Science at SFA's Arthur Temple College of Forestry and Agriculture.

"Moving to SFA was one of the greatest things for me. It began a transformation in me," White said. "I learned to objectively look at things in a scientific manner, and to have an open attitude and mindset - to be more led by what is right, instead of my feelings."

MOVE TO AFRICA
White graduated last May with a Bachelor of Science in environmental science with a minor in biology. He began his work at ACC in October. A small school, African Christian College offers a bachelor of theology degree with the choice of a major in ministry, counseling or leadership. Students bring their families, and everyone lives on campus. The college as a whole strives for sustainability.

"African Christian College seeks to be a truly African college - not totally or primarily dependent on outside [of Africa] funding," said Brad Carter, president of ACC. "In order to accomplish this vision, we must find ways to change our sources of income."

Much of the food served in the cafeteria is raised right on campus. ACC grows its own fruits and vegetables and raises chickens and cattle. Students take ownership for their education by working in the gardens to raise enough food to feed the faculty, staff, students and their families. They go to class in the morning, work in the gardens in the afternoon and have the opportunity to work extra hours to earn money for themselves.

ACC CAMPUS
The campus also has a 50-hectare macadamia tree grove as a part of its Tree of Life Project. The nuts are sold to HEB and Central Market stores to help cover the operational costs of the college. Project SEED, short for Sustainable Economic Effective Demonstration, is ACC's maize seed-growing development program. A grant from a Spanish nonprofit has allowed ACC to increase its seed production. The school grows an open-pollinated variety of maize that is suited for the Swaziland soil and climate.

"Our seed is certified by the Department of Agriculture and inspected throughout the process," Carter said. "We are one of only 30 maize seed producers in the Kingdom of Swaziland. Currently, we produce over 60 percent of the maize seeds in the country ourselves."

This is where White comes in. He is working as a leader in the college's sustainability efforts, directly overseeing the campus gardens, heading up Project SEED, and providing leadership with the macadamia orchard and livestock programs.

ACC has conducted research on how it can best serve people in the area. Local farmers were surveyed to determine how willing they are to try new things and what their greatest needs are. The school is considering developing a microloan system. ACC would give seeds and supplies to area farmers so they can produce a greater yield, which would allow them to make enough money to repay the loan and make more for their families.

"I want to find people who want to help themselves - leaders in the community," White said. "I would really like to see Project SEED be successful and be able to make a difference with distribution."

"These future educational and development efforts will help alleviate these major issues and equip students with knowledge to take back to their communities," Carter said.

ACC has a diverse student body. Of the 43 fulltime students enrolled last fall, nine African countries were represented. Many students return to their home countries after graduation, taking what they've learned at ACC back with them. The diversity at ACC is one aspect that drew White back full time.

"It's the lifestyle I want to live for a while - a hands-on, intentional, relational lifestyle," White said. "Students from all over the continent are here with many different views. It's a beautiful thing, and I am happy to be a part of it."

Eubank credits White's successes to his discipline and empathetic spirit.

"He is an outstanding young man - very intelligent and a hard worker. The thing that separates Marshal from other young people is his innate caring for those that need assistance," Eubank said. "I know that the world is a better place with people like Marshal leading the way toward the future."