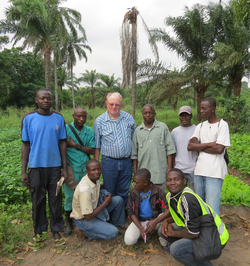 Dr. Leon Young and his students take a break from soil fertility lessons to visit their vegetable plots. As a commercial venture in addition to their family's subsistence farms, the men hope to grow leafy vegetables during the dry season to sell to the region's emerging middle class.

As Dr. Leon Young spoke about his time in Africa, his eyes lit up. Scrolling through the hundreds of photos taken during his three-week Citizens Network for Foreign Affairs volunteer assignment in Soyo, Angola, he called each person by name, sharing anecdotes about his time with them through CNFA's Farmer-to-Farmer program.

He also meticulously examined the photos taken during his layover in Angola's capital city of Launda, a city booming in oil reserves and new high-rise buildings. The construction cranes peppering the skyline stand in stark contrast to the traditional street markets and subsistence farmers that scrape out a living on the edges of the city.

"You get off the main thoroughfares in Luanda, and it's just like any third-world country," Young explained. "There are people out there living on a shoestring."

To confront this drastic inequality, CNFA implemented its F2F program in southern Africa with the goal of generating sustained economic growth in the agriculture sector through short-term technical assistance provided by expert volunteers and local staff. The program engages participant needs at every level, from soil fertility to production and marketing.

Young, a professor of agriculture at Stephen F. Austin State University, was tasked with teaching a local famer's cooperative in Soyo techniques to improve soil quality through sustainable practices and accessible, affordable resources.

As he searched Google Earth for the exact location of the farmers' small commercial plots, he explained that the farmers are attempting to grow leafy vegetables during the dry season to sell to the region's emerging middle class. That is easier said than done when key agricultural inputs like fertilizer are inaccessible and, in most cases, unaffordable.

But Young didn't have time to remain frustrated. His days were packed with soil sampling and re-evaluating lesson plans to meet the farmers' needs.

"They're already doing what they need to do," he said with a laugh. "I think all I did was give them positive reinforcement."

Young's agricultural work in Africa began in 2000 during a church mission trip to Tanzania. While participating in a prayer walk, Young said he overwhelmed a local missionary with questions regarding surrounding crops and agricultural practices.

"I said my agronomy mind is running at 100 miles per hour trying to figure out what is going on here," Young recollected.

Since then, he has taken part in six other volunteer trips. After teaching the technique of conservation tillage to his first class of Tanzanian farmers, Young purchased a small amount of hybrid corn and nitrogen fertilizer for participants. Those who continue to implement the conservation tillage practices have doubled their corn yields from 25 to 50 bushels per acre.

He joined forces with CNFA in 2013, training workers to run a soil testing lab at the Catholic University of Mozambique. Though he hoped to return to the lab this summer, CNFA representatives explained that his expertise was needed most in Angola.

As the fall semester begins, he is already proposing future trips.

"Well," he said, pausing to look away from the photos of his students and their crops. "You just feel like you're doing some good, and it's a lot of fun." 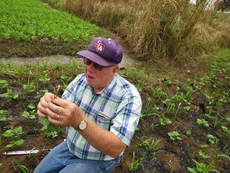