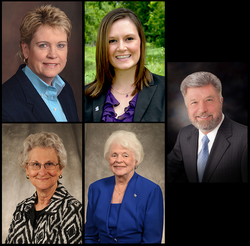 The SFA Alumni Association bestows its highest honors on individuals who have made outstanding contributions to their professions and community, committed themselves to advancing the values and goals of SFA, and ensured a better quality of life for future generations. This year's recipients include: E. Russell "Rusty" Braziel of Lindale, Lou Ann Richardson of Dallas and Kathryn Robertson of Nacogdoches, who will receive the Distinguished Alumnus Award; Amanda Williams Robbins of Houston, who is being named Outstanding Young Alumna; and Dr. Treba Marsh of Lufkin, who will receive the Distinguished Professor Award.

Braziel is the president and CEO of RBN Energy LLC in Houston. Braziel has been involved in the energy business for more than three decades as a consultant, author, speaker and contributor to numerous publications. A current member of the North American Energy Standards Board, Braziel's company provides energy market advisory services. In February 2013, he held the first RBN School of Energy - a two-day intensive course covering natural gas, crude oil and natural gas liquids. His school has graduated more than 500 students.

Richardson is the executive vice president of Wells Fargo - Dallas. Richardson, a lifetime member of the SFA Alumni Association, is co-chair of the International Group Women's Network. She is actively involved with the Communities in Schools - Dallas Region, Wells Fargo Reputational Committee and Nacogdoches' Beta Gamma Sigma, which selected her as the 2014 Chapter Honoree. The former Ladyjack mascot also is the president of Kessler Springs Homeowner Association and a member of the Nelson Rusche College of Business Executive Advisory Board and the SFA Touchdown Club, which supports various athletic programs.

Robertson is a retired educator and lifetime member of the SFA Alumni Association. She has served on SFA's adjunct faculty and has been a member of the University Women's Club since 1964, serving as president in 1969-70. A life member of the Girl Scouts of the USA, she also is actively involved with the Nacogdoches Federation of Women's Clubs, serving as president in 2012-13, and is the current president of the National Society Daughters of the American Revolution. Robertson was the 1998 Woman of the Year for the Nacogdoches American Association of University Women and was inducted into the Nacogdoches Heritage Festival Hall of Fame in 2004.

Robbins is the director of talent acquisition and retention for Mattress Firm. She oversees staffing for more than 1,400 stores, 50 warehouses and more than 300 employees. She is a member of the Rusche College of Business Recent Alumni Business Advisory Council and was co-chair for the SFA Houston Alumni Chapter in 2009-10, earning Chapter of the Year honors in 2009. While at SFA, Robbins was student body president and vice president, as well as the 2004 Homecoming Queen. She was an executive board member for Alpha Chi Omega, an orientation leader for two years and a Jack Camp counselor. She also served on the student foundation board.

Marsh has been an SFA professor for more than 20 years. She currently teaches in SFA's Gerald W. Schlief School of Accountancy. Marsh has published approximately 40 articles and recently received the Outstanding Article of the Year award from the Journal of Government Financial Management. The Temple Inland Distinguished Professor also received the Outstanding Alumni Award for Beta Alpha Psi, an accounting honor society. Marsh received the 2014 Outstanding Manuscript Award from the National Association of Government Accountants and was named a Rusche College of Business Faculty Scholar for 2013 and 2014. She is a member of the American Institute of Certified Public Accountants, the Association of Government Accountants, American Accounting Association and many more professional organizations.

Dr. Baker Pattillo, SFA president, and Dr. Mike Harbordt, president of the SFA Alumni Association Board of Directors, will present this year's awards.