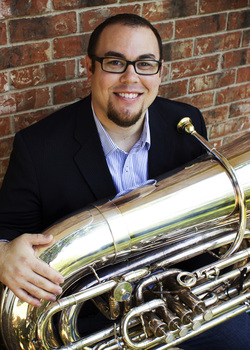 "SFA is one of several universities around the country that takes part in Octubafest, which was created to promote the tuba and euphonium as solo and chamber instruments rather than an accompanying bass line," said J.D. Salas, assistant professor of tuba and euphonium studies at SFA.

Culp, who is principal tubist for the Santa Fe Symphony, will perform "Concerto in F minor for Bass Tuba" by Ralph Vaughan Williams and "Sonata in E Flat" by Johann Sebastian Bach.

"Composed in 1954, the Williams concerto is the first ever written for solo tuba and orchestra," Salas said. "It has stood the test of time as the definitive concerto for the instrument."

Originally composed for flute, "Sonata in E Flat" made its way in to the tuba repertoire and shows the dexterity of the instrument, Salas explained.

"Some musicologists suggest that this is the work, at least in part, of C.P.E. Bach or some other composer," he said. "Yet, the authorship has not been disputed seriously enough for this light, entertaining piece to be banned from the Bach catalog. Here, the composer takes note of the emerging gallant style of the 1730s, with light textures, simple harmonies and highly ornamented melodies."

Culp is a freelance musician and private instructor in the Dallas/Fort Worth area. He holds degrees from SFA and Southern Methodist University and has performed with the Tulsa Symphony, Tulsa Ballet, Victoria Symphony and Lyric Stage. Culp has earned honors in several music festivals including first prize in the Mock Orchestral Audition at the 2011 National Brass Symposium. In 2008, while at SFA, he earned the "President's Award for Outstanding Soloist." He has advanced in several international auditions, and was runner-up for the "The President's Own" United States Marine Band and a finalist for the New Jersey Symphony principal tuba audition.