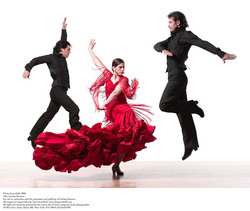 Flamenco Vivo Carlotta Santana brings an exciting evening of flamenco to Turner stage Feb. 11 as part of the SFA College of Fine Arts' 2014-2015 University Series "Connect." A wide variety of shows, ranging from Russian chamber musicians to the SFA schools of Theatre and Music presenting the musical "Spamalot," will be featured in the upcoming season, which gets under way Sept. 11 with a performance of Eugenia Zukerman & Friends.

From Russian chamber musicians to Mariachi performers and flamenco dancers, this season's selections will connect audiences with different places and cultures.

"Designed to bring quality fine arts experiences to East Texas, the series consists of five highly acclaimed professional touring groups and three university-produced performances," said John W. Goodall, associate dean of the College of Fine Arts. "Also included on the series, but at no cost to the patrons, are outstanding art exhibitions at The Cole Art Center @ The Old Opera House."

The new season begins Thursday, Sept. 11, with Eugenia Zukerman and Friends, a new collaboration of artists that features flutist Zukerman and friends Milana Strezeva on piano, Sophie Shao on cello and Hye-Jin Kim on violin for a night of enchanting chamber music. While maintaining an international concert calendar, the multi-faceted career of Zukerman also includes distinguished work as an author, educator, entrepreneur and journalist. This performance is sponsored in part by Cataract, Glaucoma & Retina Consultants of East Texas/Benchmark Optical.

The widely popular Chamber Orchestra Kremlin, comprised of some of Russia's finest young string players, returns to the SFA campus on Thursday, Oct. 16. Founded in 1991, the orchestra has carved a niche for itself under the creative baton of its founder and music director, Misha Rachlevsky.

"This orchestra performed before an enthusiastic crowd at SFA as part of the University Series a few years ago," Goodall said, "and we are excited to once again include this performance in our upcoming season."

Whether heard on highly acclaimed CDs or in a mesmerizing concert, Chamber Orchestra Kremlin's warmth and high energy create addictive performances that stay with listeners long after the last note has been played. This concert is sponsored in part by BancorpSouth.

Beginning Tuesday, Nov. 18, and continuing through Saturday, Nov. 22, the SFA schools of Theatre and Music will present Monty Python's "Spamalot." Based on the uproarious midnight-movie favorite "Monty Python and the Holy Grail," this irreverent musical parody of the story of King Arthur and the Knights of the Round Table won the 2005 Tony Award for Best Musical. Arthur, Lancelot, Galahad and "brave, brave Sir Robin" skewer more Broadway musical traditions than French soldiers and killer rabbits on the quest that has left millions of theatergoers rolling in the aisles. This production is sponsored in part by Tipton Ford Lincoln.

The University Series holiday performance features Los Camperos de Nati Cano on Friday, Dec. 12. For more than 50 years, Los Camperos de Nati Cano has featured the finest Mariachi musicians from Mexico and the United States. The ensemble is noted for complex musical arrangements that highlight the individual skills and voices of the players. Their current musical director is Jesus "Chuy" Guzman. This performance is sponsored in part by Nacogdoches Medical Center.

On Thursday, Jan. 29, singer, songwriter and multi-instrumentalist Nellie McKay joins forces with the two-time Grammy-winning Turtle Island Quartet to present a delightfully bold performance of chamber music. McKay's talents on piano, mallets and ukulele and Turtle Islands' innovative rhythmic techniques equally grounded in jazz improvisation and classical technique are guaranteed to captivate audiences of all ages. This performance is sponsored in part by Commercial Bank of Texas.

Featuring accomplished artists from Spain and the U.S., Flamenco Vivo Carlotta Santana brings an exciting evening of flamenco to the SFA campus on Wednesday, Feb. 11. Happiness, sadness, joy, sorrow are translated through this eloquent art form in a performance that will include celebrated repertoire as well as new works. This performance is sponsored in part by Lehmann Eye Center.

The SFA Opera opens Thursday, April 9, for a three-night run to showcase the School of Music's talent with one of the masterpieces of operatic literature, sung in English. The production (title will be announced in the spring) will feature SFA's outstanding student singers accompanied by orchestra and staged with set and costumes. This production is sponsored in part by Point A Media.

A choral masterworks concert on Friday, May 8, will conclude the season when SFA's A Cappella Choir, Choral Union and Women's Choir perform one of the pillars in all choral and orchestral literature - Johannes Brahm's "Ein deutsches Requiem."

All of the concerts and staged productions on the University Series will begin at 7:30 p.m. in W.M. Turner Auditorium with reserved seating.

The University Series art exhibitions include "Vision & Substance: The Art of John Cobb," opening at 6 p.m. Saturday, Oct. 25, in The Cole Art Center. The artist will talk about his work beginning at 5 p.m. An exhibition of Florida artist Stuart Riordan opens at 6 p.m. Thursday, Jan. 15, followed by the opening of "Beyond the Academy: Contemporary Outsider & Expressionist Art" at 6 p.m. Thursday, Jan. 22. Texas National 2015 will open at 6 p.m. Saturday, April 11, and also will feature an exhibition by juror Zhi Lin, a Chinese-American artist and professor of painting and drawing at the University of Washington.

Season tickets for the University Series are available through the SFA Fine Arts Box Office. They range from $135 to $200, with discounts available for seniors, students, youth and SFA faculty and staff.

"Plus, we offer two season-ticket options," she said. "The classic package includes one ticket to each of the eight performances, and the TixMix package allows the patrons to create their own eight-ticket season."

Single-event ticket purchases for the University Series or any of the other performances presented through the College of Fine Arts can be made beginning Monday, Aug. 18.